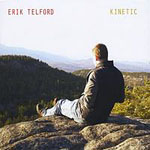 From the vibrant music scene of Austin, Texas comes Kinetic, the excellent solo recording debut of trumpeter/bandleader Erik Telford. The album features seven memorable, groove-heavy original tunes by the leader, played by a crack ensemble that contributes characterful comping and soloing galore. The band's sound lies somewhere between that of Miles Davis's bands of the early seventies and the more straightforward, four-on-the-floor jazz/funk styles of today, but with a level of musicianship, exemplified by exhilarating, lengthy solos, that sets it apart from the crowd and keeps it firmly in the jazz camp.

The record is bookended by brief excerpts from the title track which, unlike the other tunes, was recorded with a New York quartet. The full tune contains two very Miles-esque trumpet solos by Telford, and some nice liquid guitar from Viviani, over a chugging, dirty organ and infectious funk beat.

More interesting, though, are the record's other long tracks, recorded in Austin. "Horizon Problem" has a catchy, funky organ and guitar line and some excellent horn charts, with a flurry of ecstatic collective improvisation coalescing at the end in a triumphant return of the melody. Death Trap" has the suitably brooding feel of the soundtrack from some gritty seventies detective movie, with Telford deploying a wah-wah and delay pedal on his horn to mind-warping effect, and a great electric piano solo by keyboardist Angelo Lembesis. "The Rival" overlays some nice horn charts over a very Bitches Brew-like ostinato of guitar, bass, and piano, with guitarist Anderson providing a particularly blazing solo.

But Kinetic has more to offer than just fierce grooves. "Rosemary" is a brief but lovely piano/trumpet duet, with Telford paying tribute to the memory of his mother. His playing demonstrates a melodic gift and an impressive maturity of conception. "Lifted" has some nice trumpet/sax unison lines that recall the sound of classic mid-sixties Blue Notes, while "3012" gives the band space to roam in a breezier context, coaxing excellent solos from Telford, saxophonist Matthew Maley, and Lembesis.

Throughout, drummer Charles "Swift" Phillips serves the music admirably, providing a solid footing where needed and constantly stoking the fire with nimble fills and rhythmic modifications. The recording is also particularly good, with a well-conceived stereo picture that allows every member of this large band to be heard, while retaining the power of the unison statements.

In all, an impressive debut from Telford, and a most pleasurable hour of modern fusion at its finest.