By Dan McClenaghan
January 20, 2016
Sign in to view read count 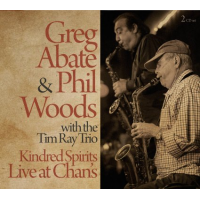 The legendary alto saxophonist Phil Woods' (1931-2015) health was failing at the time Kindred Spirits: Live at Chan's was recorded, but you never know it by listening to the crisp delivery, the vitality of a hot bebop band playing in the mode of the iconic altoist Charlie Parker. Saxophonist Greg Abate joins Woods in the front line, and the Tim Ray Trio backs them up.

It's not a first teaming for Abate and Woods. A student/mentor relationship exists there, and Greg Abate Quintet Featuring Phil Woods (Positone Records, 2012) is a testament to passion and energy the two saxophonists could conjure. So is Kindred Spirits: Live at Chan's. It's a two CD set, and the amount of the music presented is generous, the quality of the performance first rate all around.

"Steeplechase," from the pen of Charlie Parker, opens the set. Another version of the tune closes the first disc, and CD 2 has the Bird's "Yardbird Suite." The pioneer's spirit looms with a smile over the proceedings.

Abate and Woods truly prove themselves kindred souls. It takes a good ear to pick out who's doing the individual solos, though the personnel section in the accompanying booklet let's us know that Abate took the first turn on all but three numbers. Both altoists are steeped deep in the bebop tradition, and both play with passion. The Tim Ray Trio is impeccable, the pianist's solo slots full of fun and verve.

This is a polished master class in straight ahead bebop, with it's lovingly rendered Parker tunes, and Standards like Harold Arlen's "A Sleepin' Bee," the classic "Angel Eyes," Horace Silver's "Strollin,'" a melancholy "I'll Remember April," and a spicy take of Kurt Weill's "Speak Low," with the sax guys sitting out and letting the trio shine.

Phil Woods was a consistently joyful and inspired performer for more sixty years. Kindred Spirits: Live at Chan's is another gem in his discography.