BY JOHN KELMAN
October 4, 2006
Sign in to view read count 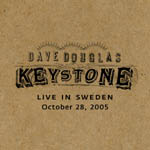 In the early days of silent film, scores were played live, most often by a single musician—simplifying the response to the on-screen activities. In recent years artists like guitarist Bill Frisell and clarinetist Louis Sclavis have upped the ante by combining composed music with improvisation on silent film scores for small ensembles, making the coordination of sight and sound much more challenging.

Trumpeter Dave Douglas' Keystone (Greenleaf, 2005) is another contemporary entry, a two-disc release including a DVD of the Fatty Arbuckle short Fatty and Mabel Adrift and a CD with fleshed-out versions of the music. Keystone Live in Sweden, the second release on Douglas' label's Paperback series of budget-priced but high-fidelity live performances, catches the group on an especially good night in October 2005.

Comparing the sextet's version of the "Fatty and Mabel Adrift Suite to the one on the DVD makes it clear just how much freedom Douglas' music affords. There are periods of pure freedom, where turntablist DJ Olive and effected Fender Rhodes player Adam Benjamin—who replaces the studio release's Jamie Saft—create a wealth of texture. But when bassist Brad Jones and drummer Gene Lake emerge from the ambience into more defined grooves, providing Douglas and saxophonist Marcus Strickland the opportunity to solo alone or in tandem, the underlying road map becomes self-evident.

Perhaps the only problem here is that the performance is so compelling that in concert it must be difficult to keep one's eyes on the film—drifting, as often as not, to watch the group. Whether that's criticism or praise depends on how you look at the situation. But in the case of this CD, where you don't have to make such difficult choices, it's possible to enjoy the music completely on its own merits.

There's plenty of high-octane playing, especially on the up-tempo "Part Five, where Strickland and Douglas playfully orbit around the theme, and during "Part One, where Strickland takes a particularly lithe solo. But there are also lyrical moments, notably halfway through "Part Three, where Douglas' muted trumpet and Strickland's soprano work off each other as they segue into the theme from the syncopated "A Noise from the Deep.

The balance of the material fleshing out this live set is a mix of two full tunes from Keystone and two new pieces—the greasy funk of "Pool Sharks and more boisterous encore, "Luke the Dog. Sadly, the logistics of putting on such multimedia events inherently prohibit extensive touring. But thankfully, this series appears purposefully aimed at giving those who can't partake of the live experience a chance to hear what they've missed.