Home » Jazz Articles » Kent Jordan: Out of This World

Kent Jordan: Out of This World

The clear, authoritative voice that was uniquely his from his debut recordings has grown richer
—Khephra Burns

It could be argued that Kent Jordan's new Funkshenal Art Media release Out of This World is not new at all. Jordan, who originally recorded this CD for another record label over ten years ago, withdrew it in 1994 when it became apparent that he and the label could not come to terms over the project's marketing. Fast-forward to 2004 and Jordan, along with his Out of This World CD, is making a bold entrée into the very much "of this world" process of music marketing and distribution. And in doing so, Jordan exemplifies the sense of creativity that makes this music art.
No discussion of this CD or Jordan's desire to develop a new way of marketing his music would be complete without a brief biography of the artist. His father, tenor saxophonist Edward "Kidd" Jordan is a music educator and creator of some of New Orleans' most spiritual and creative music. A true "guardian of the flame," his bold and unencumbered approach undoubtedly fueled his son's own musical interest. Jordan's brother, trumpeter Marlon is a leader and recording artist in his own right, while sister Stephanie (who makes her recording debut on this CD) is a promising vocalist in great demand around the New Orleans festival and club scenes. Rounding out this musically rich family is sister Rachel, a classically trained violinist with the New Orleans Symphony Orchestra. Together, the Jordans are a New Orleans' musical treasure that represents the breadth and depth of the Crescent City's musical talent.
While he has toured and recorded with the likes of Wynton Marsalis, Alvin Battiste and the legendary Elvin Jones, Jordan's sound is uniquely his own, developed through years of study, performing, teaching and maturing. As writer Khephra Burns states, "The clear, authoritative voice that was uniquely his from his debut recordings has grown richer...Out of This World is deeply in and of this world in its understanding and expression of the range of human emotions."
The CD's first selection, Bobby Thomas, Jr.'s "After Love, Emptiness" is an ensemble piece reflecting the concept for the entire project. The artists are given room to explore the range of emotions expressed in the composition, but yet remain true to the theme. Paul Carr's soprano, along with the keyboard work of Darrell Lavigne (also the arranger) and Jordan's flute is featured.

Easily a highpoint of the project is Elton Herron's arrangement of the title cut, "Out of This World." The counter melodies of a Bulgarian chant voiced by Kent's alto flute, Lavigne's keyboard-synthesized clarinet and Carr's tenor solo blend to evoke a modal mood reminiscent of Coltrane's sheets of sound technique.

Jordan's role as artistic director of Jambalaya Jazz in, an annual Rio de Janerio festival presenting the music of Louisiana side by side with that of Brazil, was perhaps foreshadowed by the inclusion of Ivan Lins and Victor Martins' "The Island" and Milton Nascimento's "Vera Cruz." The former features a seamless vocal duet by Stephanie Jordan and Roderick Harper, while the latter is an up-tempo celebration of Latin music that features complex solos by both Jordan and Carr. Both selections serve to further accentuate Jordan's rich, diverse musical tastes.

Throughout the CD's fifty-plus minutes, the rhythm section of pianist Darrell Lavigne, bassist Roland Guerin and drummer Julian Garcia provides a solid foundation from which the soloists are free to explore the different colors and textures of the chosen music.

Perhaps as ambitious as the music, is Jordan's desire to create a media organization that will embrace the differences of individual artists. His dream is to make Funkshenal Art Media a haven for artists who desire to create, not conform and to create a brand that listeners come to associate with a specific lifestyle and emotion. Jordan recently performed the music of Out of This World at the Ft. Lauderdale Museum of Art for the South Florida Friends of Jazz concert series. Plans are to continue personal appearances, while exploring different distribution channels like the Internet and non-traditional retail outlets.

Like all true art, ten years has not diminished the beauty of these timeless works. As for hearing Out of This World for the first time, it only makes the anticipation for future projects that much greater.

Until next time, see you 'Round About New Orleans.

Visit Kent Jordon on the web at www.kentjordan.com . 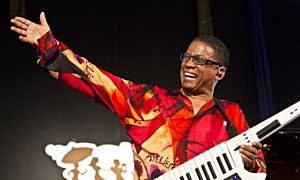