By DUNCAN HEINING
February 18, 2016
Sign in to view read count 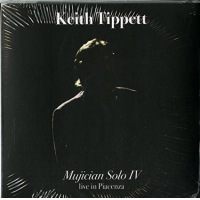 From its opening notes, it is apparent that Keith Tippett's first solo recording in fifteen years is something very special indeed. Tippett has always been a player with a talent for musical pyrotechnics, cascades of notes—triplets, trills, mordants and arpeggios-colliding with mighty tone clusters. But equally, he has also been an artist of great emotional subtlety and depth. Both these qualities are in evidence here. For much of the record, the sense is less that of Rachmaninov, more that of Ravel—less that of Cecil Taylor or Alexander von Schlippenbach, more that of Bill Evans or Paul Bley. Each note is considered and weighted. Each phrase presented with care and then reconsidered, repeated or re-examined to discover all of its possible nuances. Chocolate box melodies, gossamer-like fragments, hints of ragtime or blues, those bird-song passages one associates with Messiaen, skipping dance-like themes—all are brought into play here. And 'play' is exactly the right word to use in this context. This is free 'play' as the purest of human creative activities, play as learning and discovery. True there are passages in the middle section of the set, where delicacy is supplanted by frantic activity but the overall impression remains one of quiet, pastoral rapture rather than of that shamanic intensity of which Tippett is equally capable. When the music does build to a crescendo, it is because the drama of the moment demands it and, at such times, the contrast with what went before or comes after is merely a part of the story Tippet must tell. At one point, whilst his left hand plays a series of resounding mordants, Tippett's right hand plays "The Londonderry Air." This leads, in turn, into a fast-paced blues, punctuated by divergent, stabbing left-hand chords. It reminded me of the Ives' piece, "Country Band March," and the lovely story behind it. That this section is succeeded by something closer to Chopin, also a great improviser, merely emphasises the sheer range of music and emotions present here. Mujician Solo IV—Live in Piacenza is a truly beautiful record, warm and, as always with Tippett, heartfelt. In fact, it might well be the perfect introduction to his music.