The Empresarios: The Vibes 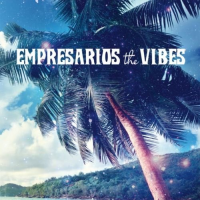 Even though they're based in Washington, DC, every piece of music from The Empresarios—either their own or in collaboration with others—sounds like you've just rolled into a torrid party on tropical Miami Beach. And even though they're based in Washington, DC, Empresarios bandleader Javier Miranda and lead singers Frankie Rosado and Felix Perez all hail from Puerto Rico, and the colorful tropicaliente sound of that sunny island comes through in the band's unique blend of salsa, reggae, cumbia, dub and house.

Their third studio album, The Vibes is no exception. The opening "No Vamos A Parar" seems to come into your ears from every direction—a hip-hop beat, a funk bass line, a rapped vocal, reggae organ, and tropical horns that blow the feeling of warm sunshine over all. The title track sounds strong and mighty, with reggae horns and organs setting the hot stage for Miami-based Columbian rapper Ephniko Barba Less | DJ Waggy Tee and others to roast and toast on.

Featuring the Salsaley Orchestra, "Salsoul" slips into a measured yet slippery "low rider" Latin funk groove that pops with percussion, while scorching trombone and trumpet solos keep the Latin big-band tradition warm. "Encanto" is a love song written for the band's motherland, but it's hardly a ballad—the percussion and rappers keep the beat popping while a lusty trombone solo fans its tropical island flame.

The Empresarios turn their musical vision further south, to the sunny reggae and dancehall sounds of the Caribbean, for this set's last two tunes, the dubby instrumentals "Rootsy Jam" and "Alegria," which creeps along on swirling organ and percussion.

The Vibes was composed by Empresarios guitarist Paul Chaconas, and sunnily follows up El Sonido Magico (2013, Fort Knox Records), which climbed all the way to the top of the CMJ world music chart.