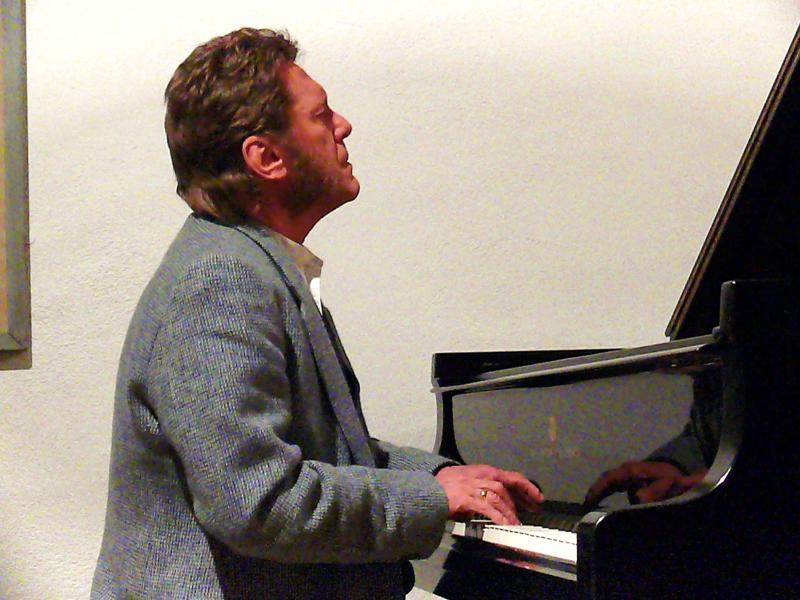 Pianist Keith Tippett and his wife Julie Tippetts ("Tippetts" was the pianist's original name, but he dropped the terminal "s" early in his career, though his wife retains it in her name) have been making music together for over forty years, but their duo concerts remain special events, with just a few airings each year. Their rare appearance in Cambridge on an autumnal Friday evening, in the genteel surroundings of Kettle's Yard, was courtesy of the Cambridge Modern Jazz Club. Perhaps the whole experience was epitomized by the announcement at the beginning: "The loos ["bathrooms," for the US audience] are the plain white doors either side of the Henry Moore sculpture." The intimate nature of the gallery space was appreciated by the musicians as much as the audience.

Over the years the pianist has developed into a unique stylist on the UK, and indeed, world jazz scene. Tippett's work ranges from his heartfelt free improvisation as a solo pianist and with duos and small groups such as the masterful improvising quartet Mujician, to compositions for, and performances with, contemporary classical groups (including the Kreutzer and Elysian String Quartets). However, new releases have been more sparse in recent years, and the most recent recording bearing his name wouldn't give listeners a clear idea of what was in store this evening. Viva La Black Live at Ruvo (Ogun, 2007) was a big band extravaganza featuring Tippett's tunes alongside those of departed South Africans Harry Miller, Mongezi Feza and Dudu Pukwana, played by an Italian ensemble, featuring drummer Louis Moholo-Moholo, with vocalists including Julie Tippetts.

To date Tippett's duets with his wife have been documented on only two discs Couple in Spirit (Editions EG, 1989) and Couple in Spirit II (ASC Records, 1997). Of course, Tippetts has been a regular collaborator of the pianist in a variety of settings, adding her heady vocals to diverse projects like Ovary Lodge, Arkansas Dedication Orchestra, the Dartington Trio, and Tapestry. Most recently they also gave a memorable performance during the 2008 London Jazz Festival as part of what was almost a Keith Tippett mini-retrospective.

With only brief bows by way of introduction, Tippett plucked the piano strings for a very gentle start to the first set. A tinkling wind-up music box and gentle arpeggios vied with his companion's wordless whisperings to break the dramatic tension. Once embarked on their journey, the pair traversed an enthralling soundworld of moods—extremes ranging from ethereal to downright bluesy and dynamic, from virtual silence to eruptive thunder. Their years of shared experience were manifest in a preternatural responsiveness whereby they switched tack so effortlessly as to suggest preconception, as when a romantic passage from the pianist prompted a private smile from his wife and she began intoning barely distinguishable lyrics, for a beautiful confluence.

But as Tippetts has previously explained: "We never rehearse together or talk about what we're going to do. You're living on your nerve ends. It's like being in a dream and yet awake at the same time because you have to respond as well as to instigate, and your whole body is tuned to going for the magic." As it turned out they had a high success rate in sparking and consummating the desired magic during the course of two improvised sets totaling some 85 minutes. 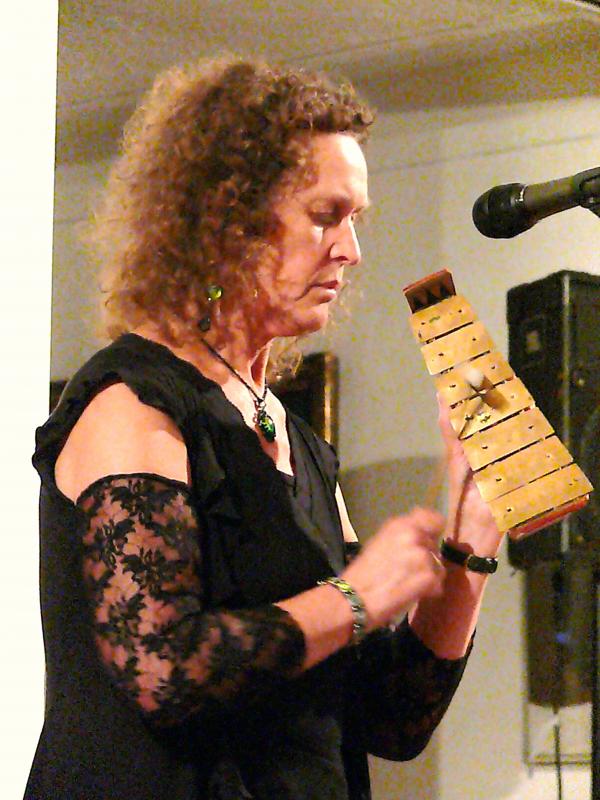 The vocalist demonstrated a wonderfully expressive range and delivery, from airy whispers to throaty earthiness, even at one point producing an astonishing split-toned vocal hum. To supplement the textures, she also deployed various percussion instruments, including prayer bowls, a thumb piano, seed pod shakers, prayer drums and a Balinese xylophone. Always on the lookout for uncommon timbres, at one point she struck a prayer bowl and then used her mouth cavity to moderate the resonance of the bowl while her partner eked out a measured accompaniment. Church bells striking somewhere nearby serendipitously added to the dreamlike ambience of slow tolling piano and chiming prayer bowl.

On piano Tippett melded jazz, blues, folk, dissonance and classical sonorities in a timeless aesthetic which transcended genre. Though spontaneous, he often added a sense of structure through repeating phrases and motifs, not always straight away, but sometimes several minutes later as with the bluesy piano voicings which prompted wordless shouts from his partner, only to submerge before emerging to anchor a passage of tippy-toes piano and voice.

Readers familiar with the musical term "prepared piano" would especially appreciate Tippett's version. One of the most distinctive facets of his oeuvre is his use of objects to prepare the piano as he is going along: what one writer has characterized as "unprepared piano," as the artist has the pieces lined up on the piano frame and ready to use as the inspiration takes him. A glance under the lid at the interval revealed a range of items including pebbles, a wooden box, wood blocks—and a whistle, alongside the music box and a maraca. 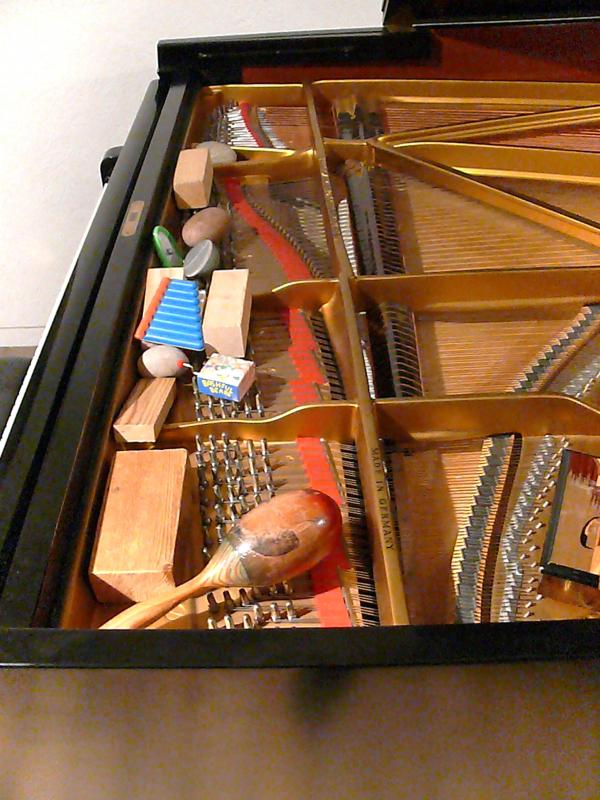 At one point Tippett placed the wooden box onto the strings at the treble end of the keyboard but didn't play there immediately, instead supplementing it with more objects which, when that part of the keyboard was eventually struck, resulted in multiple voices, a tinkling wall of sound—a harpsichord on steroids. Sometimes it seemed the objects added a chance element to the musical narrative, but at other times their use seemed far more calculated, if not entirely predictable. One particularly electrifying illustration occurred during intense concentration on the middle and bass registers, when the pianist suddenly punctuated his flow with an astonishing sound like a trumpet fanfare and cymbal clash combined, a sonic effect derived from a foray into the treble register where he had previously placed various objects on the strings. So pleasing was the sound that it became a featured motif five or six times in the one passage.

Starting with resounding rumbling piano like a waterfall in full spate, the second set took on a very different character from the first. Tippetts' voice hovered, just barely audible, above the clamor, lending a ghostly edge to the music and conjuring an epic feel to the proceedings. Whether it was the intimacy of the venue or just a particularly kinetic evening, there was an emotional charge in the air, resulting in numerous wonderful combinations. One percussive interlude specially stuck in the mind, with Tippetts chiming on Balinese xylophone as her partner shook a maraca in one hand while using the other on the keyboard to produce scrabbling piano patterns on strings dampened by articles inside the piano. Gradually the dnese melange of rhythms and textures mutated into a chopsticks-like prancing, calling forth another more puckish mood to explore.

Towards the end, the pianist's rapidfire staccato rattle, accompanied by his wife rapidly rotating prayer drums, suddenly switched, midstream, into a more romantic Satie-esque passage. Tippetts managed the transition by slowing her rhythmic tempo until playing sparsely, when she began wordless scatting. Her husband responded with blues-tinged phrases, before manipulating under the lid to give a harpsichord-like edge to the sound. He also wound up the music box inside the piano and played delicate counterpoint, pressing on the strings to bend his notes. This exquisite passage brought the concert to a close with gentle tolling fading into silence.

At the end of the tumultuous and prolonged applause, Tippett responded, disarmingly saying "That's all we know," before going on, as is his custom, to thank the audience for their contribution. "You could hear a pin drop," he said, referring to the near-reverential attention during the just-completed performance, "which gave us the space to breathe. I really do feel there was a real communion tonight. Thank you so much." Talk of communion didn't seem out of place at all for what had been an almost mystical experience. A very special show indeed.

About Keith and Julie Tippett