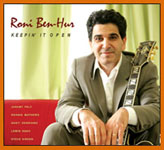 Roni Ben-Hur, originally from Israel, has been a mainstay of the New York straight-ahead scene for twenty years now. Having a style that is clearly out of the Wes Montgomery/Grant Green mold, Ben-Hur makes no apologies for his predilection for the sound and style of the Blue Note label from the fifties and sixties. Like saxophonist Scott Hamilton, Ben-Hur has internalized this music and plays from within its essence, rather than at it, adding the sounds and emotions from his homeland.

Keepin' It Open follows the wonderful Signature (Reservoir, 2005), and has the same instrumental lineup of guitar, piano, bass, drums and percussion, but adds trumpeter Jeremy Pelt to the mix.

The players are grouped as trio of Ben-Hur, bassist Santi Debriano and drummer Louis Nash, a quartet adding pianist Ronnie Mathews or a sextet with Pelt and percussionist Steve Kroon. The style varies from swing of different kinds ("Can't We Be Friends," Thelonious Monk's "Think Of One," Elmo Hope's "One Second Please," and Ben-Hur's "My Man Harris" "Back When" and "Indian Summer") to bossa nova ("Like A Lover" and "Recado Bossa Nova"). As with Signature's "Eretz," Ben-Hur includes a tune evoking his roots ("Eshkolit").

While the musical level is as high as would be expected, Keepin' It Open suffers in comparison to Signature when considering such intangibles as group cohesiveness. The earlier album was smooth as silk, with Ben-Hur and pianist John Hicks completely in synch, and the rhythm section along with them. The recorded sound oozed relaxation, even during the burners.

Alas, the current album sounds strained, tense and thin. Ben-Hur's guitar sounds a hair flat with itself, the piano or the bass, adding further to the tension. The recording sounds very congested at times with the band not jelling. The parts sound as though they were separately recorded and then poorly mixed.

On the positive side, "Eshkolit" is simply outstanding, and Pelt pours himself into the Middle Eastern melody. Ben-Hur's pays homage to his mentor, Barry Harris, on "My Man Harris," which is also done very well with everyone in the pocket.

While each track has its charms, the cumulative effect of the mix lessens the enjoyment of Keepin' It Open. To hear how good Ben-Hur really is, go with Signature.