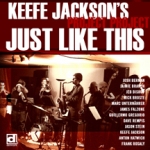 Arriving in Chicago from Fayetteville, Arkansas in 2000, multi-instrumentalist Keefe Jackson has been steadily making waves in the Windy City's vibrant jazz community. His recent offering, the swinging and adventurous Just Like This, showcases Jackson's historically aware writing as well as the astute abilities of his collaborators.

Ready Everyday (Delmark, 2006) was the adventurous post-bop premiere of Jackson's sextet, Fast Citizens. Just Like This is the debut of his large ensemble, Project Project. Comprising a dozen of Chicago's finest improvisers, it balances the formidable sonic intensity of a mini-big band with the sensitivity of a chamber jazz group.

Although he contributes burly, infectious tenor solos on the swinging title track and "Wind-Up Toy," this session primarily focuses on Jackson's abilities as a writer and arranger. With a bevy of impressive contributions from numerous soloists, Jackson's band members play with fiery passion, navigating shifting meters, contrapuntal structures and assorted textures.

Alternating Ellington-esque harmonies and rich ensemble charts with brisk patches of ardent improvisation from a throng of brass and woodwinds, "Dragon Fly" invokes the warm nostalgia of the past without ignoring the future.

Sharing a similarly conventional theme-and-solos construction, the title track "Just Like This and "Wind-Up Toy" swing with infectious ebullience. Rich counterpoint and subtle ensemble harmonies during unison passages give way to blistering solo sections of fervent intensity and brisk pacing.

Blending the sumptuous multi-horn voicings of Ellington and Strayhorn with the modernist angularity of such free jazz mavericks as Muhal Richard Abrams and Sam Rivers, Just Like This embodies the best elements of the jazz continuum, another welcome addition to the varied and brilliant Chicago jazz scene.