By JOHN EYLES
November 7, 2017
Sign in to view read count 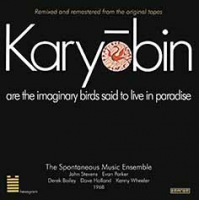 Karyōbin is a crucially important album in the history and development of freely improvised music. Originally studio-recorded in February 1968 and issued as an Island Records LP later that year, it was remastered and re-released on CD by Chronoscope in 1993. Fine as the music was, both of those issues suffered from less than ideal sound balance, particularly of the bass and drums. Now, just in time for the fiftieth anniversary of the album's recording, Evan Parker's favourite sound engineer, Adam Skeaping, has worked his magic and corrected the balance. In addition, Martin Davidson has removed unwanted clicks and noises—including one caused by Yoko Ono ringing the studio's doorbell! The end result is that the album sounds far better than ever before.

The Spontaneous Music Ensemble (SME) had released their first album, Challenge in 1966 on the small Eyemark label. At that stage, SME was centred around drummer John Stevens, trombonist Paul Rutherford and saxophonist Trevor Watts, who had met each other while on national service in Germany. Although largely improvised, the music still featured compositions credited to one of the three and the rhythm section was still conventional enough to make it mistakable for free jazz. By summer 1967, SME consisted of Stevens plus saxophonist Parker, then aged 23. However, when the offer came for SME to make an LP for Island, the two saw it as a perfect opportunity to invite trumpeter Kenny Wheeler, guitarist Derek Bailey and bassist Dave Holland to join them in a quintet. Wheeler had played on Challenge and continued playing occasionally with SME into the 70's. Bailey had guested with Stevens and Parker in SME but was not yet a household name; remarkably, on the Island LP he was credited as Dennis Bailey! Holland is better known as a jazz musician than an improv player; before the end of 1968, he had been recruited by Miles Davis to join his band and was recording Filles de Kilimanjaro.

Despite not playing together regularly, this quintet clearly had no problems gelling and finding common ground. Straight from the off, they sound like a long-established quintet who are easy in each other's company. The music consists of six tracks which are entitled so that they sound like parts of a suite but, in fact, it was freely improvised by the quintet. Their playing was based on two simple rules of Stevens': "If you can't hear somebody else you are playing too loud" and "If what you are doing does not, at regular intervals, make reference to what you are hearing other people do, you might as well not be playing in the group." Judging by the coherence and empathy displayed across the six tracks, neither of those rules proved to be a problem for any of the five. There is a consistency of sound and approach which does make the six tracks like the composed parts of a suite, but enough individual creativity to make it obvious that all five were improvising throughout. A classic.