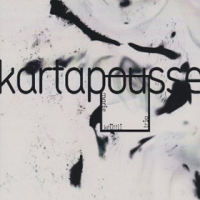 Kartapousse is the debut album from the Marie Kruttli Trio. Leader and composer Marie Kruttli, born in French Switzerland in 1991, is joined by two more young Swiss musicians, bassist Lukas Traxel and drummer Martin Perret, on a collection of her original compositions. It's a promising start to the trio's career.

Apparently, Kartapousse is a subtle homage to the role-playing game Pokemon. Non-Pokemon fans may well find the homage to be somewhat too subtle, but it doesn't matter one jot as far as enjoying the music is concerned.

The tunes that emphasise short, repetitive, rhythmic hooks—such as "Sepia" or the bouncy "Purple Shadows"—give the group a similar character to the Neil Cowley Trio, energetic and immediate. "Turquoiserie" represents another aspect of Kruttli's approach—the gentler, ballad-style approach that reflects the influence of European classical composers and American jazz piano greats like Bill Evans. Kruttli herself name-checks Craig Taborn as her major influence.

"Purple Shadows" and "Coaran" combine the strong rhythmic feel of "Sepia" with the gentler moods of "Turquoserie." "Jean Jacques L'Espagnol" is Kruttli's most romantic composition, with Traxel and Perret at their most subtle. "Bout De Lumiere" opens in sprightly, upbeat, fashion with a strong rhythm before relaxing into a gentler mood—Traxel's extended bass solo is considered and sweet.

As a whole, Kartapousse is an engaging album featuring strong performances from all three players. The band may not yet have found its own unique sound, but there's plenty here to suggest that this is just a matter of time.

The press release for Kartapousse states that the Marie Kruttli Trio has arrived "at an exiting (sic) time in jazz history." Let's hope this is a simple typo—jazz needs trios like this to be on their way in to the music, not on their way out.