An Evening with the Pops 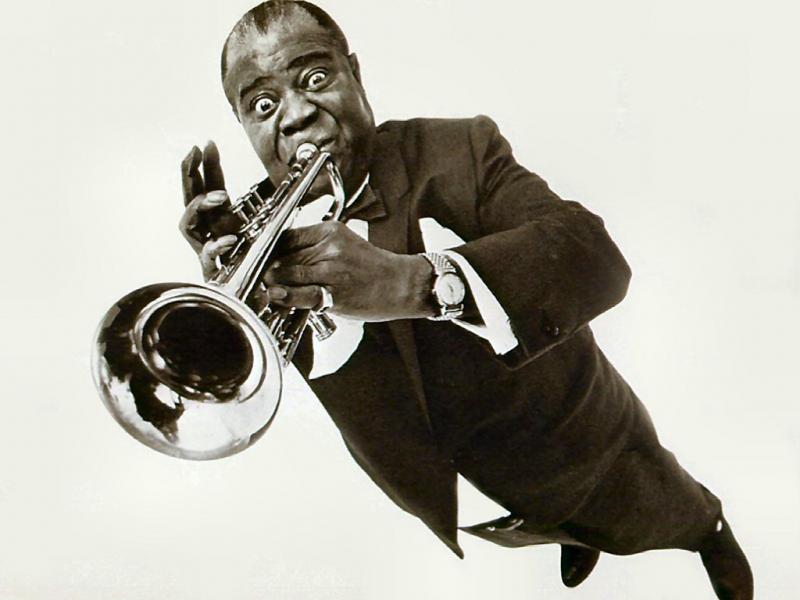 Louis and Lil hit it off almost immediately, despite the fact that both were still married to other people. Louis was married to a former prostitute from New Orleans named Daisy, while Lil was married to beloved Planter's spokeslegume, Mr. Peanut.

There are several theories concerning the origin of jazz. The most prevalent is that jazz originated primarily in New Orleans, a so-called "gumbo" of influences ranging from African polyrhythms to European classical to American Negro spirituals, and permeated the turn-of-the-century culture to the point that within two decades it had established hotbeds in the two largest cities in the country at that time, New York and Chicago. Another, lesser-accepted theory is that the same aliens who built the pyramids returned after several millennia of monitoring and gave us a more pleasing style of music because they absolutely could not stand the thought of any more folk music. Still another, almost universally rejected theory is that jazz was the result of a secret government experiment to protect us in case of invasion by Canada (the operating principle being that the rhythmless Canucks would be made so self-conscious by their inability to dance to the provocative and kinetic new music that they would slink back over the border and go back to sharpening their ice skates or whatever in the hell it is they do up there).

A written apology has already been faxed to the Canadian embassy.

Louis Daniel Armstrong was born in the Storyville section of New Orleans, in a neighborhood called "the Battlefield" (because it was strewn with barbed wire, casualties and surrendering French) and believed for many years that he had been born on July 4, 1900. He later discovered that he had actually been born on August 4, 1901. Some paranormal researchers credit this 13 month incongruity to extraterrestrial abduction, which has been known to cause inexplicable gaps in memory. This lends some credence to the alien-inspired theory of jazz, a theory which renowned physicist Stephen Hawking has called "damned silly."

Armstrong's early years were not exactly of the Ward and June Cleaver variety. He was raised poor by his mother, a domestic servant and part-time prostitute, in the midst of one of the toughest sections of a tough city. At the age of 11, he was arrested and sent to a reform school for firing a pistol into the air to celebrate New Year's Day 1914. He was not arrested for firing the pistol, but because it was only 1913 and it was expressly against the law in those days to get ahead of yourself.

It was while in the Colored Waif's Home for Boys that Louis first picked up the cornet, after first trying his hand at percussion and bugle (and noting, even at this early age, that bugle players weren't exactly chick magnets). By the time he was released at the age of 14, he had become good enough to come under the tutelage of the famed cornetist with the Kid Ory Band, Joe "King" Oliver (not to be confused with Nat King Cole, who was someone else entirely).

Louis' abilities flourish under Oliver, and soon he was outdoing his mentor. Louis took over for Oliver in Ory's band when Oliver left for Chicago in 1919, and then joined Oliver in 1922 to play second trumpet (there were only two trumpets in the country back then. That's all they needed). Playing with Oliver developed Louis' harmonic sensibilities, and his understanding of economy in his lead lines. His perfect ear and matchless technique came even further to the forefront. Very soon Louis was a star attraction at the Lincoln Gardens, an ornate dance hall frequented by the cream of Chicago's jazz-hungry young society. And he would also catch the eye of a gifted and ambitious pianist, Lil Hardin (no relation to feared gunslinger John Wesley Hardin, who doesn't have a damned thing to do with any of this).

Louis and Lil hit it off almost immediately, despite the fact that both were still married to other people. Louis was married to a former prostitute from New Orleans named Daisy, while Lil was married to beloved Planter's spokeslegume, Mr. Peanut. Louis obtained a divorce, while Lil simply made an abnormally large portion of Kung Po Chicken. The pair were married in 1924.

Lil was to be a driving force in Louis' career for the next decade, urging him from the comfort of King Oliver's band to a higher profile gig with Fletcher Henderson in New York. Henderson's band was the mainstay at the legendary Roseland Ballroom, a place where New Yorkers went to dance and be seen (which afforded them the opportunity to use that phrase all New Yorkers cherish, "Whadda YOU lookin' at?").

Before Armstrong, jazz had primarily been an ensemble art, a collection of instruments contributing to an organic whole. Now, Armstrong's staggering virtuosity brought the soloist to the forefront. His effortless command of the upper range of his instrument, combined with his fearlessly inventive improvisations and increasingly distinctive vocals, forever raised the bar for all musicians to come. The trumpet became the principal lead instrument in jazz, and every single instrument that was to comprise a jazz band was forced to bring their A-game from that point on. It is no small coincidence that the banjo essentially disappeared from the scene at this time.

On the basis of his recordings, considered by many still to be among the finest in the history of jazz, Louis was now a star (11 hr 10m right ascension, +56 d 24' declination. Look it up, I'll wait). Relentless touring and recording with a series of different ensembles all over the country only spread his reputation. In these days before mass media, it required far more work to become a legitimate star.

Now, instead of having talent and a sterling work ethic, it is far easier to just show up at a major awards show wearing half a dress or tattoo every available inch of skin and make sure your vocabulary maintains that always-crucial mix of equal parts slang and profanity. That said.

By the onset of the Thirties, with the Depression in full grip of the nation's economy, Louis could no longer rely on Lil's business acumen to steer his fortunes. He turned instead to reputed Mob figure Joe Glaser, who had ties with Al Capone (including a lovely silk cravat which Glaser and Capone took turns wearing on alternating Fridays), who used his influence to keep Louis working and continually building his legend. Glaser would guide Louis' career for the next 35 years, never revealing his underworld connections to his client and friend. Even to Glaser's death in 1969, Louis never once suspected that he was not a professor of 16th Century English literature at Columbia, despite the fact that Glaser could never spell Shakespeare the same way twice.

Well, kids, here is where we will leave off till next month, when we will delve even deeper into the life and times of one of the most hallowed figures in jazz history.

Your Own Personal Genius recently had the pleasure of vacationing in the fine city of Baltimore. While there, I particularly enjoyed visits to the American Dime Museum, the Babe Ruth Museum, the B&O Railroad Museum. Why so many museums? Because part of being a Genius is knowing a lot of stuff, and museums are generally lousy with all sorts of educational crap. I mean that in a good way.

I also had the opportunity to attend an O's game with Our Leader, Commodore Ricci. Jazz was spoken, beer was consumed, and the thoughtful Orioles put aside their mad desire to reek and beat the Mariners 8-7 in 10 innings. But did Senator Ricci and I see the outcome? No. We were forced to leave in the ninth, having been in Maryland longer than is allowed by state law without eating crabs, and missed the outcome. We would have hated to get caught at one of those roadside checks where the state police use a Breathalyzer to test your blood's Old Bay seasoning content. But I'm sure the Orioles will recompense two future jazz legends with complimentary passes (box seats, behind the plate, on the aisle), a heaping portion of Boog's Barbecue (beef for Dr. Ricci; pork for me, a native Virginian to whom the flesh of the pig is as much a staple of our diet as rice is to much of the world), and all the Clipper City Gold' we can drink.

Continue: An Evening with the Pops, Part 2