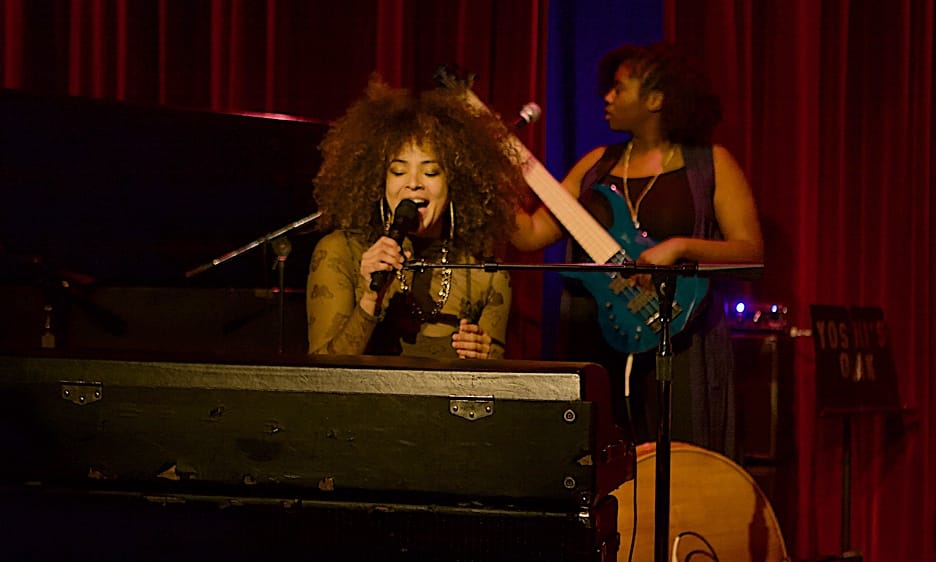 Talented Blue Note Records singer-songwriter and pianist Kandace Springs graced the stage at Yoshi's in Oakland for a pleasantly packed house engagement. Springs presented tracks from her debut album Soul Eyes (Blue Note Records, 2016) and from Indigo (Blue Note Records, 2018), along with music on her upcoming album The Women Who Raised Me (Blue Note Records, 2020). She called her new record a tribute to the women who've influenced and inspired her over her career. Some of the notable women on her comprehensive list were Sade, the enduring Nina Simone, Roberta Flack, Norah Jones and many others. This photojournalist doesn't usually cover shows on a school night, especially a mid-week date following the long President's Day weekend. However, it was a rare opportunity to see the rising recording artist performing live at Yoshi's, one of the San Francisco Bay Area's premier music and dining venues.

The relaxed pianist was enjoying her Oakland gig, and it was reflected by the receptive East Bay crowd showing its appreciation throughout the robust night. Springs the pianist also proudly and emphatically celebrated Girl Power with her All Women band consisting of Taylor Moore on the drum kit and Caylen Bryant on acoustic and electric basses.

Tonight's extensive set list included: "Novocaine Heart," "Gentle Rain," "Oscar," "Angel Eyes, "Devil May Care," "Solitude," "People Make "The World Go Round," "Pearls," "Love Is Stronger Than Pride," "Nearness," "How Insensitive, "What Are You Doing (With The Rest Of Your Life)," "The World Is A Ghetto," "First Time Ever I Saw Your Face," and "I Put A Spell On You."

She opened the show with her "Novocaine Heart" with its driving beat and syncopated refrain "Why it gotta be like that?" Her moving arrangement of the Thom Bell, Linda Creed and George Perry penned soul ballad "People Make The World Go Round" had the house humming along. Originally popularized by the Stylistics in 1972, the soulful classic song has been recorded by dozens of artists.

Springs shared with her fans how her Dad, vocalist and band leader Scat Springs (The Scat Springs Band), would throw his shoe at the tv if he really liked the program. During Moore's extended drum solo, she removed a shoe and made a mock toss in her drummer's direction.To add to the evening's fun, bassist Bryant had a roaring, green rubber dragon adorning the head of her upright bass.

In addition to Springs competent song writing abilities, she also demonstrated amazing skill in the way she seamlessly and confidently covered and merged material from different genres into her own personal style. Springs was adept at performing blues, jazz, rock, soul and ballads with equal dexterity and awareness. Her melancholy rendition of War's "The World Is A Ghetto" was a distinctive treatment of the haunting title track featured on the 1972 Billboard number one album.

As the evening was winding down, a pleased female fan sitting nearby with her date commented," I enjoyed the music and I love her." It was his first time hearing Springs and he was also complementary. Another first time listener shared her impressions of Springs' standout performance, "Great voice and vocal stylings, and it was interesting to hear about her musical inspirations. I liked the way she highlighted her band members' talents. She's covering some great women, and she seems well connected in the music circles!"

Throughout the night, the uninhibited club responded enthusiastically to the vibrant music presented on stage and Springs encouraged full audience participation. She often invited fans to sing along during the show. After hearing vocal contributions from a series of individual participants, the pianist gleefully pointed to them and proclaimed, "You get a contract... you get a contract..." several times. She clearly knew how to engage the vigorous room. Springs' scintillating school night set and the finale, Screamin' Jay Hawkins' "I Put A Spell On You" also covered by Simone, garnered a standing ovation from the attentive audience.

Ms. Springs made this Wednesday evening excursion worthwhile as she and her energetic band of young women invigorated the always lively East Bay establishment. As the house emptied, numerous complements and laughter filled the warm evening air.