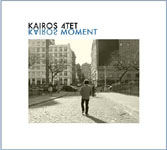 A luminous debut album from four young London musicians which, unexpectedly, affirms the eternal verities of acoustic jazz. Supple rhythms, strong melodies, inventive harmonies, flowing improvisation...it's all here and it bucks the trend. Since the adoption of Acoustic Ladyland by the mainstream media round about the release of the band's album Last Chance Disco (Babel, 2005), Britain has seen a rash of high decibel punk/jazz outfits—a few of them, like Led Bib, offering invigorating antidotes to the bland and the staid, others only infantile style jockey attempts to catch the wave.

Kairos 4tet was formed in 2008 to play the compositions of saxophonist Adam Waldmann, whose guest credits include the outstanding electro-acoustic adventurers Polar Bear and pianist Gwilym Simcock. As his association with Polar Bear suggests, Waldmann has an enquiring mind and, as his association with Simcock equally suggests, he is comfortable with the tradition. Among his formative influences, Waldmann lists saxophonists Wayne Shorter and Julian Arguelles, and singers Joni Mitchell and Stevie Wonder. As might be hoped given these influences, Waldmann writes arresting, tuneful melodies, most of them sunny, others wistful.

Completing the band are bassist Jasper Hoiby, who leads his own fine trio Phronesis, and has worked with Polar Bear saxophonist Mark Lockheart, and drummers Rob Barron (best known for his work with singer Damon Albarn), and Jon Scott. Singer Emilia Martensson joins for one track. The album was recorded in October 2008, roughly eight months after the group got together.

Waldmann's writing falls into two broad categories. Moderately paced, dreamy ballads on which he plays tenor, and friskier workouts, often built on muscular, middle to low register bass and piano ostinatos, on which he plays soprano. Eight of the 11 tunes, including the three short "Kairos Moment" interludes and the Martensson feature "Unresolved," are at the dreamy end of the spectrum. Waldmann's tenor playing has a sumptuous quality which goes back beyond Shorter and Arguelles at least as far as Ben Webster. His soprano playing is harder to pin down, spry and bright and perky, and very much his own.

Greece, ancient and modern, seems to have played a part in the genesis of 4tet: the front cover shows Waldmann strolling away from the camera in what could be Athens or Thessaloniki, while kairos is an ancient Greek word meaning an opportune moment for action. Kairos Moment, vividly hued and imaginative, sits comfortably beside both references, and establishes Waldmann as a precociously talented composer and player whose progress promises to be rewarding to follow.