The rhythms can be quite intricate and multilayered having a strong feel of both short and long pulse that helps create the undulating, hypnotic feel.

Having been following the Sunny Jain Collective since the release of Mango Festival (Zoho, 2004), but never quite able to hear them live, I was really looking forward to this show, especially since the release of Avaaz. Samita Sinha, who was added to the Collective since Mango Festival, also leads her own group, Kaash, with a new CD Seep that is just out. The set was split between the groups playing the music from their respective records, with Kaash starting, and the total effect was electrifying and mesmerizing.
Jain is on record as working to produce a real fusion of Western jazz with pan-Indian influences including not just classical Indian music (both Northern and Southern), but also Bhangra (dance music from Punjab), bhajans (religious songs) and Bollywood. Along with Rez Abbasi who not only plays in the Collective but leads his own groups, Vijay Iyer and Rudresh Mahanthappa, whose recent release Raw Materials blends these materials in yet another way, Sunny Jain and Samita Sinha are producing a new music in which American jazz can subsume and synthesize with a quite different musical esthetic to become something new.

Both of these leaders have studied their traditional music intensively, and each would say it really has no end. The subject of Indian music is extremely complex, and is quite beyond this article, but its essence is that it combines the spiritual and meditative with the sensual and the celebratory. The music is part of the culture, both sacred and profane and not something to be thought of as mere "entertainment." This attitude of presenting a gift to the audience was quite palpable at the performance, creating an atmosphere that brought time to a halt.

Technically, that which characterizes Indian music is straightforward, even though Westerners will hear it differently than those raised in the traditions. Harmonically much simpler than Western jazz, the music is scalar with microtones, but with a strong feeling of tonal center which some hear as producing a sense of key that is thwarted by the unexpected treatment given some of the notes, creating a surprising tension. The phrasing, although irregular from jazz's point of view, has a logic which creates very long lines that can seem to have no beginning and no end. The rhythms can be quite intricate and multilayered having a strong feel of both short and long pulse that helps create the undulating, hypnotic feel. All of this is then combined with a sense of circular rather than linear time, where a given piece's beginning gives no hint of its ultimate length.

Given this dense base, Kaash took the stage with band members that represented the fusion of these musics. Jesse Neuman not only played trumpet inside the two styles, but used various electronic effects sensitively and in the service of the music, helping to create a floating feel, while Dan Fabricatore's bass playing tread the line between the repetitive nature of the music and the drive needed for the Western infusion. Isabel Pupo-Walker was outstanding playing various percussion instruments that came from Latin music, but which had their sounds and rhythms molded to be in close coordination with Jain, whose drumming constantly drifted back and forth between West and East, when he was not using a laptop for effect. Tabla was not missed.

The arrangements allowed each band member to stretch out a bit, while never losing the sense of tightness. Drama was never far away and many tunes had clear emotional peaks. This was an artistic as well as a musical performance.

Sinha herself has an extremely strong stage presence, always exuding a sense of control, both technically and emotionally. Dressed in modernized and beautiful traditional garments, she commanded attention. Her voice could change from extroverted to vulnerable within one phrase, all the while balancing the feel of tune with that of the ecstatic.

After Kaash, Sinha and Jain stayed on for second half. Immediately noticeable were the absence of Rez Abbasi and Steve Welsh. I wondered how the music would fare, and especially how Sebastian Noelle navigate the "non-changes," plus how Rudresh Mahanthappa would fill in for Steve Welsh. Avaaz was still fresh in my mind and the resulting set was remarkable in the way that the arrangements had been changed to handle the different personnel.

Noelle was outstanding, really playing from the inside of the style, without being intimidated by the music itself or the ghost of Abbasi. He added his own feel, while maintaining the connection through chords and scales to the Indian music base. Anyone who has heard Mahanthappa in any band knows that he is one of the more intense players around, with a tight focused sound and conception. On this night, he managed to submerge these instincts when needed, but bursting forth when the time was right.

The core of the Collective is without a doubt Jain and Gary Wang on string bass. The recordings do not make clear what a tight unit the two of them are, and the power that they produce while remaining nimble and focused. There is not a hint of anything repetitive in anything Wang does, and he manages to be melodic within music that has few changes. Jain is a joy to listen to and to feel. Jazz has had many drummers that drive the music themselves, but Jain manages to find and cultivate that crease between the two worlds.

Outstanding music played by musicians with fire and intellect, the set ended much too quickly.

Visit Sunny Jain and Samita Sinha on the web. 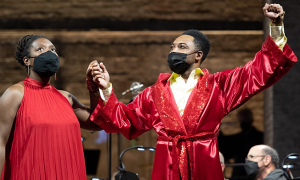 Boston Lyric Opera Plays the Music of Terence Blanchard at...