By Marcia Hillman
October 10, 2006
Sign in to view read count 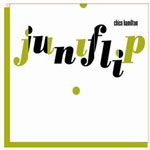 What is it with jazz drummers? They seem to go on forever like the Energizer bunny. Chico Hamilton celebrates his 85th birthday this year with four new releases, of which Juniflip is a swinger with guests George Bohanon (trombone), Jimmy Cheatham (bass trombone), and vocalists Bill Henderson and Arthur Lee (frontman for the band LOVE) augmenting Hamilton's working group, known as Euphoria: Cary Denigris (guitar), Paul Ramsey (Fender bass) and Evan Schwam (flute, tenor and soprano sax).

The recording presents an eclectic selection of material and styles. There's blues, R&B, the '60s hit "Yeh Yeh (dedicated to Carlos Santana and featuring a searing solo by Denigris), and classics such as "Ain't She Sweet, Benny Goodman's "Don't Be That Way (done wonderfully as a ballad with a Henderson vocal), and "What's Your Story, Morning Glory? (a Jimmy Lunceford Orchestra staple on which Arthur Lee shines). There are bossa novas, ballads and rockers, including originals by Hamilton and Denigris.

A tight ensemble sound graces every track. Hamilton has managed to put together musicians who, according to him, are "just here making music. Everyone is in a groove and having a good time and it translates to the listener. And behind it all is Hamilton—tasty and ever-young. Maybe it's because the drum is closest to the heartbeat.

Mr. Hamilton; A Little Bit of This, A Little Bit of That; Ain't She Sweet; Yeh Yeh; How's Your Feelings; You Name It; Don't Be That Way; Cary's Footsteps; (If You Think You're) Groovy; What's Your Story, Morning Glory?; Without Love (Nothing Matters); Just Play The Melody; Kerry's Caravan.