By Clifford Allen
October 9, 2006
Sign in to view read count 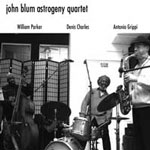 Bassist William Parker is known for his telepathic collaborations with percussionists; of late, his work with Hamid Drake has become an in-demand support system. Unfortunately not as well known or historically revered was his longtime partnership with free-percussion architect Denis Charles, which lasted from the '70s until Charles' death in 1998.

Recordings such as Parker's Through Acceptance of the Mystery Peace (Centering/Eremite) and In Order to Survive (Black Saint), clarinetist Peter Kuhn's Livin' Right (Big City) and Rob Brown's Breath Rhyme (Silkheart) all belie the formidable ergs of energy and swing the pair exuded. Bringing him together with Parker together for one last time under the guise of a quartet led by pianist John Blum and fleshed out by Palermo-born altoist Antonio Grippi, Charles' final recording stands as a testament to improvisational unity.

Being paired with a volcanic pianist might seem fitting for Charles, who got his start with Cecil Taylor in the '50s and always had a penchant for finding the shuffle-boil in Cecil's playing. If one is familiar with Charles' work with Cecil and Steve Lacy, where his flurry of sparse accents opened up the music and goaded soloists, such airy bebop is certainly far from Astrogeny. Charles, however, evolved masterfully with the maelstrom that characterizes free jazz from the post-Trane era forward—his accents and continual melodic reformation became faster and fuller in this context, the singsong wits he matched with Lacy now feed Blum and Grippi back everything they throw out.

Ostensibly, however, this is Blum's group. A player who owes something to the piano rolls of Byard and the chord-drumming of Joel Futterman, Blum has worked with Sunny Murray and Mat Maneri. Astrogeny is his first date as a leader, and he and Grippi co-composed all of the music. On "Simultanium," Blum muscles his way to the foreground in a mass of block chords as Grippi's bent post bop phrases pirouette metallically above and around the ensemble. As Grippi decorates the music's surging pulse with barely controlled caterwauls, bursts of red-blood squall reminiscent of Sonny Simmons and Noah Howard, Blum and Parker create a multiple-engined thrum, underpinning the improvisation while pointing it in multiple directions at once.

The scrappy motif set by Grippi and Blum in "Astrogeny sends the pianist into a flurry of Nancarrow-isms, Charles egging on and opening up with nasty repeated snare motifs. Grippi enters in the midst of a multiphonic spray, Blum feeding him broken sound-chunks, forming an aural ledge on which his alto climbs the stratosphere. For sure there are motions plaintive and calm amidst the fray—"Encomia is woody and brooding, but it's too tense to serve as true respite, its eddies and whirlwinds poised to take charge.

Though nobody knew Charles was on his way out the door, this quartet is playing as though all of their lives depended on it. Indeed, living music is truly the best tribute.