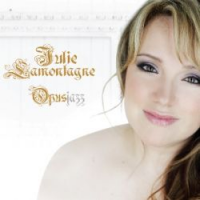 From her earliest years, pianist Julie Lamontagne was immersed in classical music, but after attending a concert by the great Oliver Jones, she switched to jazz in her mid- to late teens. However, her musical mother tongue and first love remains classical, to which she returns to after a long hiatus, but with a new angle: she wants to integrate classical music with the more open-ended structure of jazz, leaving herself room to improvise. The result is Opusjazz, a music that is at once daring and unique, and of considerable merit, notwithstanding that it will probably generate considerable discussion and controversy.

She rearranges, for example, a Chopin ballad, "Chopinerie," and uses its melodies and emotional underpinnings as a springboard for her own expression, seamlessly and sympathetically launching into an extended improvisation, which might resemble a cadenza (the set part in a concerto that allows for "unstructured" improvisation), or the kind of improv that proceeds from a fixed motif within the music, equally balancing composition and improvisation.

What is first evident in Lamontagne's thoughtful and wholly convincing arrangements is the performer herself, totally secure and serene in the new territory she has staked out. Lamontagne is a die-hard romantic, and the music she has chosen is the flesh and blood extension of feelings and passions she lays bare with uncanny honesty and delicacy. The technical control that she now exhibits is the logical outcome of having something to say and perforce, having to say it: control begins in the mind.

To even consider such a project presupposes not only belief in one's creative faculties, but that the rewrite is strong enough to stand comparison with the original. What takes place from one selection to the next is that Lamontagne stops playing the composer and plays herself, which leaves her open to the accusation of hubris, since she is making the case that her improvisations and arrangements deserve to be on the same page as the original. In this same vein, it should be mentioned that another notable Canadian jazz pianist, Francois Bourassa, also uses classical music as a point of departure, but his is an original music and can only be compared to itself, which makes it a near or no-risk affair.

In undertaking such a bold project there will be unintended effects. Even though Lamontagne does not repeat her improvisations or inventions from one performance to the next, the recorded version will play the exact same notes every time and will come to be regarded as pure composition. Invariably, comparisons will be made between the original and the rewrite. The project will be judged successful or not according to the listener's stated preference, unless both are regarded as equally valid.

Another unintended effect is the possibility that Lamontagne's paradigm will not only be embraced, but will stimulate a more general demand to creatively tinker with classical repertoire which, up until now, has been stored and scored in stone. For those unfamiliar with classical music, Lamontagne's work can be evaluated as complete works unto themselves, with no objective reference.

The challenge Opusjazz poses, then, is to accept the music on its own terms until the melodies and emotions are deemed no longer exclusive to either the original composer or Lamontagne. What strikes the ear throughout is that Lamontagne has shown herself capable of compelling invention without compromising what is eternal in the original. Her version of the third Debussy "Pour le piano" is highly inventive and more than worthy of repetition, but because it's jazz and not classical it will only truly be experienced once live.

Even though Lamontagne identifies herself as a jazz musician, Opusjazz persuasively argues that she is a romantic at heart, and that the jazz idiom cannot adequately accommodate her romanticism. That said, she is also an adventurer, which explains her attraction to jazz, the fact of which predicts she'll be making her home in both worlds for the indeterminate future.