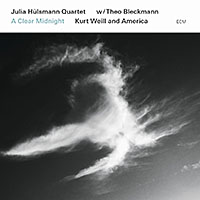 Given enough time, things in life often come around full circle. Julia Hülsmann's three recordings for Munich's ACT label were all vocal affairs, where the German pianist's core trio—with bassist Marc Muellbauer and drummer Heinrich Köbberling—were joined by singers ranging from Norway's Rebekka Bakken to Germany's Roger Cicero. Since moving to another Munich label, the more heralded ECM Records, Hülsmann has demonstrated a more careful approach to expanding and evolving her work. Her first two recordings for the label—2008's The End of a Summer and 2011 followup, Imprint—pared things back to her core trio as if to signal a new beginning, adopting a wholly acoustic approach. Rather than returning to singers, Hülsmann expanded her 14 year-old trio to a quartet on 2013's In Full View by recruiting British trumpeter Tom Arthurs—a terrific choice that facilitated the pianist's ongoing migration towards a more evenly balanced blend of elegant lyricism with a more outgoing approach.

But, clearly, Hülsmann has enjoyed working with singers and, perhaps just as importantly, with songs. And so, for her fifth ECM date (including a 2009 collaboration with guitarist Marc Sinan, Fasil), Hülsmann has paired her quartet with Theo Bleckmann, a German singer who, since relocating to New York City in 1989 and collaborating with the likes of über-guitarist Ben Monder and drummer/composer John Hollenbeck, has garnered a reputation for fearless improvisational élan that often includes the use of electronics and a penchant for unpredictable musical choices for jazz interpretation, like his Hello Earth! (Winter & Winter, 2012) project which, brought to the 2011 edition of Heidelberg, Germany's Enjoy Jazz festival, took the music of Kate Bush into territory even the intrepid British prog-pop goddess could never have envisaged.

If A Clear Midnight -Kurt Weill and America largely dispenses with Bleckmann's electronics and, on paper at least, draws from a songbook that's long held a more direct tie to the jazz world, one listen to what may be Weill's best-known song, "Mack the Knife," makes clear that this is not going to be a conventional set of readings.

Bleckmann is faithful to Weill's melody and Bertolt Brecht's lyrics—his purity of tone and subtle embellishments far more effective than anything more extravagant could ever be—but there the similarities end. Hülsmann's arrangement—revolving around a deceptively simple two-note, two-chord motif of fifths on her left hand, her right adding colours that add just the right balance of consonance and dissonance—is largely a solo piano accompaniment that's augmented, when the music finally modulates, by Arthurs' simple but perfect flugelhorn lines, weaving in and around both Hülsmann and Bleckmann. It's a brilliant choice to open an album that doesn't just pay tribute to Weill— and, on three consecutive tracks that act as a conceptual breather, poems by Walt Whitman set to Hülsmann's music—it reinvents them.

The chemistry of Hülsmann's trio is inescapable, but after more time playing together as a quartet and rendering Arthurs a more fully integrated member, much of A Clear Midnight was road-tested after first being instigated by Dessau's Kurt Weill Festival in 2013, before heading to Oslo's Rainbow Studios a little less than year ago, where the music was further honed in collaboration with the quintet's sixth member, label head/producer Manfred Eicher.

Not all of the arrangements are as radical as "Mack the Knife," but a song so iconic simply had to be reinvented so that when lesser-known Weill songs like "Your Technique" come around, with its original changes more dominant (albeit still reharmonized), it becomes clear that the group's interpretive skills are as key to the freshness of its approach as the predetermined arrangements by almost everyone in the group. Only Arthurs' contributions to the record are solely instrumental; still, they demonstrate such an exacting perfection in both accompaniment and as a front line instrument that it's a wonder he's not better known. With a warm tone juxtaposed, at times, with a Harmon-muted tone that renders his playing as vulnerable as Miles Davis at his fragile best, he's at his most impressive on Hülsmann and Bleckmann's co-arrangement of "Little Tin God," where the singer's electronically layered and looped choral introductory cushion provides a context for Arthurs to wax more burnished.

When the group finally enters over Hülsmann's repetitive upper register motif, the song assumes more conventional form; but when it comes time for Arthurs to solo, the group dissolves into complete and unpredictable freedom, as Hülsmann takes over with an unexpectedly jagged approach. It's the most surprising song of the set, and one that, perhaps, is a portent of things to come. Either way, it's certainly a sign that this quartet is evolving...and at a rather rapid pace at that.

Elsewhere, Hülsmann's three compositional contributions demonstrate similar growth, in particular "A Noisless Patient Spider," where Bleckmann's oblique melody is mirrored by the pianist's sparse but equally skewed harmonies...until, that is, she takes a solo that once again finds a nexus where lyricism and more skewed tendencies seem to work wonderfully together. Muellbauer and Köbberling—a simpatico team whose empathic elasticity gives every song on A Clear Midnight both its anchor and its unpredictability—bolster Hülsmann with simmering intensity; first Arthurs' muted horn and then Bleckmann (wordlessly and in falsetto) re-enter, delivering a repeated line atop the trio that gradually gains dominance until, as the trio fades to black, there's nothing left but this line...slowly decelerating to silence, only for Bleckmann and the quartet to return for a brief final verse that ends almost mid- thought.

Bleckmann has never been one for unnecessary gymnastics; instead, he demonstrates his effortless virtuosity in less overt ways, like at the end of the closing, arpeggio-driven "Great Big Sky," where he holds a vibrato-less note, with perfect intonation, for a full ten seconds. It's this kind of purity of intent and execution that makes Bleckmann such a perfect fit for Hülsmann—without question the best vocal pairing of her recorded career—and the pianist's group, which seems to be getting stronger, more telepathic and increasingly experimental with each record. If Hülsmann's three ACT recordings demonstrated a pianist and trio with great promise, it's been with her series of ECM sessions upon which this promise has been delivered, with A Clear Midnight her most fulfilling—and fully reaized—yet.