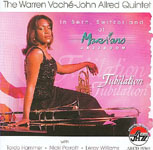 Warren Vache is one of just a few active cornet players, though he proves to be a lot more wide-ranging in his choice of songs than the late great Ruby Braff (while also possessing a greater sense of humor). Having studied with Pee Wee Erwin, Vache gained early experience playing with Benny Goodman, Vic Dickenson and Bob Wilber. He has recorded over three dozen albums as a leader and is a regular on the jazz party circuit. These 2007 performances at the renowned Marians Jazzroom in Bern, Switzerland pair the cornetist with trombonist John Allred, a jazz party favorite who has had surprisingly few chances to record as a leader. Rounding out the group is the Manhattan favorite Tardo Hammer on piano, Australian bassist Nicki Parrott (another jazz party regular) and drummer Leroy Williams.

In spite of his reputation as a mainstream performer with an emphasis on swing and standards, Vache mixes in quite a bit more. The breezy setting of Horace Silver's "Song For My Father" showcases Allred rather well, while the sauntering pace of Silver's "Strollin'" features tight harmony by the two horn players. Vache and Parrott enjoy a playful vocal duet of James P. Johnson's obscure "Sweet Hunk O' Trash," with the leader answering Parrott's vocals with hilarious spoken commentary until they switch roles. Of course, they are on the money in their interpretations of standards, especially on the sparkling "Strike Up the Band" and the remarkably subtle treatment of "Caravan."

Old Devil Moon; They Can't Take That Away From Me; Song For My Father; My One and Only Love; Change Partners; Strollin'; Sweet Hunk O' Trash; Jubilation; Strike Up the Band; Caravan; We'll Be Together Again.