BY KURT GOTTSCHALK
January 22, 2009
Sign in to view read count 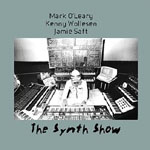 Irish guitarist Mark O'Leary has built a nice relationship with Leo Records over the last few years, having recorded for the label with Mat Maneri, Matthew Shipp, Eyvind Kang, Uri Caine, Steve Swallow and others. O'Leary seems to favor the trio setting and enjoys throwing himself into new contexts. His ninth Leo release, The Synth Show, with Kenny Wollesen on percussion and Jamie Saft on synthesizer, may be his most surprising outing yet.

Saft and Wollesen are certainly knowledgeable about jazz, but tend to step further from the tradition than many of O'Leary's past associates. As such, The Synth Show is always in a slow and easy flux. The title doesn't put forth a lead player, but it does suggest a lead instrument and Saft's axes (analog synthesizers seem to be used through much or all of the record) very much set the tone for the session.

At times the trio doesn't seem to be playing together at all: jazz licks and electronic gurgles swirl over slow marches and washes. Then two of the three will seem to lock in, creating an inverted pyramid with the 'soloist' in the rear. But they do this with an easiness; they're not wandering looking for each other but wandering together, like a search party dividing up patches of ground together. It's spacey in a mellow Krautrock way, or jazzy in a trippy fusion way. Either way, it's an easy but unusual listen.

Ultimately, the record feels like an exercise, albeit an interesting one. The synth—the star of the show—is always percolating with new suggestions and the others respond, or don't respond, nicely. It never quite goes anywhere, but maybe it's not meant to.