By DAN BILAWSKY
December 5, 2014
Sign in to view read count 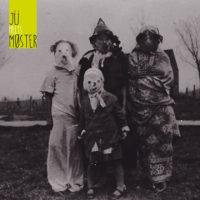 To experience this collaboration between Norwegian saxophonist Kjetil Møster and Hungarian power trio JÜ is to alternately move through hazy soundscapes and the perilous rapids of progressive music with avant-jazz leanings.

JÜ—the trio of guitarist Àdàm Mészáros, bassist Ernö Hock, and drummer Andràs Halmos—deals in spiky tones and mystery-laced minimalism, working an artfully edgy angle with pile driver rhythms and shredding abandon one minute, and letting atmosphere trump firm direction the next. Møster matches their level of intensity and inconstancy, delivering deep melodic tones, squawking and rioting his way through much of this music, or leaving sonic voids for others to fill. All four men prove to be kindred spirits, eager to assault, assuage, and assault again.

"Dear Johann," opening on a sax-and-drums encounter that leads to a firmly grounded groove-jam; "Bhajan," moving from the ominous to the intense; and "Hassassin," raucous and violently raw, point to pleasure through excess and aggression. The other three numbers on the program, however, point to a more nuanced path through the unknown. "Morze (for Ágoston Bèla)" and "One" both begin as explorations of dark ambiance, settling later into slow and weighty grooves. "KJÜ," which finds Mészáros hinting at danger through cold alien language while Møster paints with his clarinet, is something with no precedent here.

The key to this collaboration, much of the work that both parties do on their own, and much of what comes out on the RareNoise imprint is open-mindedness. Willingness to try something different in music doesn't always lead to concrete failure or success, but it almost always leads to adventure, and sometimes, that's all that's needed.