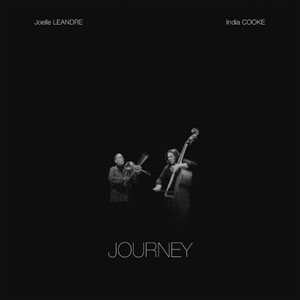 Joëlle Léandre's name on the sleeve guarantees invention and passion. Over the years, the French improvising bassist has made the duet format one of her prime modes of expression, pairing, in recent years, with George Lewis and Jean-Luc Capozzo on just two recent examples from a discography now more than 150 strong. Further swelling the ranks, this live date from the 2008 Conference of the International Society for Improvised Music matches Léandre with Bay Area violinist India Cooke.

A lecturer at Mills College in Oakland, Cooke's appearances on disc have been more parsimonious. The duo's association predates the violinist's 1996 debut, Red Handed (Music and Arts), but they have played together several times since, including a set at the 2004 Guelph Festival, documented as Firedance (Red Toucan, 2005), and performances, the following year, at France's Le Mans Festival and New York City's Vision Festival.

Happily, the academic environment has not rubbed off on either performer. Over the course of 43 minutes, the two women demonstrate deep listening and stratospheric instrumental chops on seven spontaneously improvised pieces, including a solo feature for each. While beholden to no genre, they fleetingly touch and merge contemporary chamber music atonality, jazz propulsion and classical melody. Virtuoso playing is put to the service of storytelling, as the two strings spiral in intertwining inspiration. Léandre's deeply resonant tone encompasses both bowing and picking, with a litany of scrapes, creaks and strums. Cooke's violin soars and swoops, but she also scrubs and taps, as she seeks to find the right sound.

"Journey I" begins with Cooke tapping her bow on the body of her violin, as the bassist deploys a six-note figure, which becomes a recurrent motif and the backbone for the intense but simpatico improvisation. Léandre's unaccompanied "Journey III" is a tour de force, culminating in a contrapuntal triumvirate of droning arco, rhythmic bass slapping and vocal exclamations. Cooke's singing legato on her own "Journey V," with its trace of country blues, simultaneously evokes yearning and joy. Twin vocal incantations (the bassist intoning Cooke's name) begin the closing "Journey VI," before the duo picks up its instruments, but there is otherwise little evidence of the theatricality which can sometimes be found disconcerting. In spite of a slightly distant recording suggesting the ambience of a large hall, this responsive twosome's Journey makes for a compelling listen.