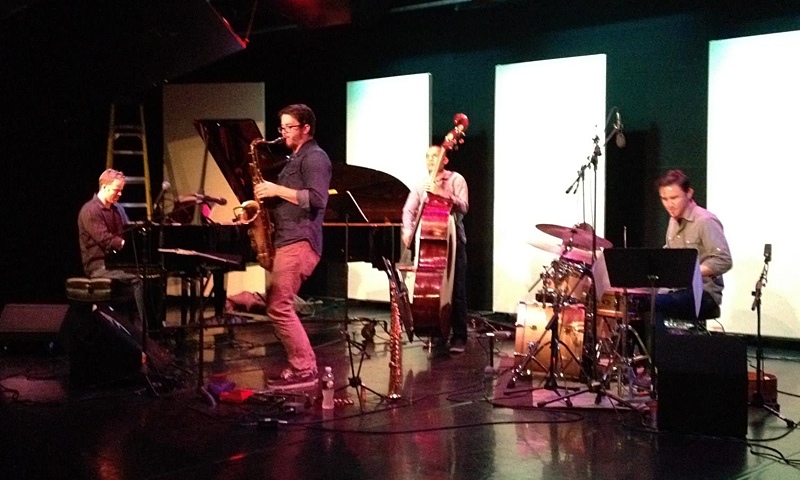 On the intimate stage at Alvas Showroom in San Pedro, with warm, colorful lighting and a large, slanted mirror hanging overhead, the Jonathan Rowden Group gave a heartfelt performance to an appreciative audience. Rowden, a young Los Angeles based composer, showcased his own works alongside those of the group's pianist, and everyone in the band contributed inspired playing. The group consists of Jonathan Rowden on saxophones, Ryan Pryor on piano, Chris Hon on bass and James Yoshizawa on drums and percussion.

The set opened with one of Rowden's compositions, "27-1," which featured Rowden, Pryor and a Hon. The sensitive interplay between everyone in the band set the tone for the evening, and everyone took cues from each other, propelling the tune forward until it came to a close with a transition to the next song. Rowden used his pedals to contribute to the imaginative explorations of texture that constituted the transition as the band moved forward into Pryor's "Autonation." Experimentation with timbre and texture was a theme of the evening and is one of the group's strong suits. They continued with Pryor's arrangement of "In the Singing," which opened with a duo between him and Rowden; the subtle communication between the two of them attested to their musical chemistry. Rowden's "Rin's Song," an up-tempo number based around a catchy melody, followed. Composed for solo saxophone for an engagement Rowden had in Japan, the melody is rhythmically intriguing and the setting for the quartet is very open, allowing for a lot of harmonic freedom. The set closed with Pryor's arrangement of Madonna's "I'll remember," which brought forth fiery playing from everyone, particularly Yoshizawa.

The second set began with "Long Road Home," a drum feature written by Rowden especially for Yoshizawa. The first half of this tune found the band playing very rubato, with Yoshizawa making expert use of the kit to create a gorgeous palette underneath. They continued with a composition of Pryor's titled "Outside My Window," a fun tune with a lighthearted melody and intriguing harmony. The triplet feel and phrasing made it vaguely reminiscent of a jig. The final tune of the night provided the band an opportunity to showcase their superb ability to create captivating soundscapes. Rowden's "Snowing in Paradise" began with a completely freely improvised introduction where Rowden made expert use of his pedals, creating ethereal vocal effects. The melody was established and the group quickly picked up the intensity. The song and the night ended with scorching intensity as the band proceeded to crescendo into the final note. Definitely check this group out next time they are playing.