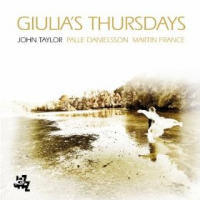 There has been a flurry of activity around film music this spring/summer 2012, all of it good. Warner Jazz has released an anthology of movie themes written by the Italian composer Nino Rota, Collector Nino Rota; Alex Sutton's piano trio took northern European movie composers as its inspiration on Legentis (F-IRE); and University of Illinois Press has published John Caps' biography, Henry Mancini: Reinventing Film Music.

British pianist John Taylor's Giulia's Thursdays is a tribute to another Italian film and TV composer, Carlo Rustichelli. It is the fourth in a series of trio albums (the third of them augmented by saxophonist Julian Arguelles) that Taylor has made for Cam Jazz, and was actually recorded not long after the relase of the first, and greatest, of these, Angel Of The Presence (2006).

Giuliana's Thursdays is a spirited, lushly romantic outing in which Taylor, bassist Palle Danielsson and drummer Martin France shine. There is substance as well as gloss to it, and if it does not quite come up to the mark of the three releases before it, that is because of the source material rather than the performances. Rustichelli wrote well crafted, attractive tunes—check the YouTube clip of "Canto D'Amore" below, which is covered on Giuliana's Thursdays—but like most screen composers, he relied on orchestration and instrumental texture rather than harmonic invention to sustain interest. His tunes, pretty as they are, do not, ultimately, offer Taylor much to explore in a trio context—certainly not as much as Taylor's own work or that of Steve Swallow and Kenny Wheeler on the earlier Cam Jazz releases.

Rustichelli, in fact, seems a strange choice for a Taylor trio album, one about which the bland liner notes offer no information. It seems likely that the idea originated with someone at the Rome-based Cam Jazz label, or, just possibly, with the Italian singer Maria Pia De Vito, who Taylor recorded with several times in the early 2000s. Rustichelli is not a name which trips off many northern European tongues. Unlike his compatriot and near contemporary, Nino Rota, his profile outside Italy was small. He did work on a few international successes—notably Divorce Italian Style and The Thief Of Bagdad (both 1961)—and three of the first four tracks on Giulia's Thursdays are taken from those two films.

Taylor makes the best of the material in front of him—which is to say, more than it had in it before he started—and anyone who has been listening since the masterpiece that is Angel Of The Presence is likely to enjoy it.