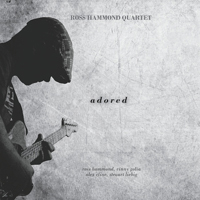 Adored is the debut of Sacramento-based guitarist Ross Hammond's Quartet. Although Hammond's previous recordings have featured an array of configurations (ranging from solo recitals to spontaneous improvisations with various West Coast peers), this date is among the most impressive in his growing discography. For the first time, the relatively young guitarist leads an all-star quartet of respected veterans, including multi-instrumentalist Vinny Golia, bassist Steuart Liebig and drummer Alex Cline—all notable bandleaders in their own right.

Randy McKean's liner notes compare Hammond and company's fervent interplay to the ecstatic zeal of The New Thing—an assertion confirmed on the introductory title track. Stirred by Liebig and Cline's roiling undercurrent, Hammond's searing fretwork and Golia's trenchant tenor ascend through an intensifying series of bristling exchanges that recall the rhapsodic discourse between Sonny Sharrock and Pharoah Sanders on Sharrock's criminally out of print masterpiece, Ask The Ages (Island, 1991).

The poignant closer, "Water Always Finds It's Way, Like The Soul," perfectly encapsulates the album's contrasting modes, seamlessly merging inside and outside approaches that ebb and flow from tranquil eddies of lyrical restraint to driving torrents of cathartic release—elevated by Wayne Peet's incisive piano filigrees. Bolstered by the stellar contributions of Hammond's venerable sidemen, Adored strikes a carefully considered balance between the accessible and the avant-garde, making it a perfect introduction to the work of an artist who deserves far greater recognition.

Adored; Sesquipedalian; She's My Little Girl; Joaquining; Maribel's Code; Hands Up!; Just Knowing You're There; Water Always Finds It's Way, Like The Soul.