By Mike Jacobs
September 8, 2018
Sign in to view read count 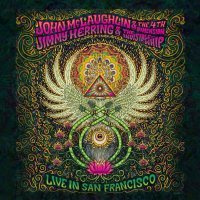 If you're a concert-goer of a certain age (and ilk), 2017 and early 2018 have proven fairly remarkable. Whether "last waltzes," overdue reunions or just plain old-school tenacity, many titans and heroes of the jazz-rock/prog era—such as Brand X, King Crimson, Soft Machine and Dixie Dregs—have been making the rounds in some major markets and stomping the terra. But foremost among them all may have been the John McLaughlin / Jimmy Herring Meeting of the Spirits tour.

Huge, yes for being billed as McLaughlin's farewell tour of the States with his formidable 4th Dimension (and a co-bill with guitar wonder Jimmy Herring's Invisible Whip) but even more monumental because it promised the first (and likely last) substantial unpacking of his legendary Mahavishnu Orchestra repertoire in decades—something swarms of McLaughlin fans have awaited for just as long. Add that it would be performed by the combined forces of both groups and there was a mass salivation among MO devotees that Pavlov himself would have marveled at.

To those who missed the chance to witness this live, all is not lost. Happily, the final, 73-minute, combined-band set of MO material—recorded on the penultimate night of this historic tour—has been preserved on Live in San Francisco.

There's an undeniable thrill transmitted in the opening blasts of "Meeting of the Spirits" on this record. Embodied in them are not only the first bracing salvos heralding the MO's birth in 1971, but also the promise of their long hoped-for reincarnation. From those notes on, that promise is gratifyingly fulfilled.

Much in the same way as the aforementioned King Crimson's recently-expanded touring unit has now afforded upgraded live versions of 70's catalog pieces (previously available only on recordings that may suffer from dated sounding technology and production values), the 9-piece Meeting of the Spirits band delivers deft new readings of these MO staples with expanded depth and modern sound quality. It's also easy to draw parallels between the very full sound and capabilities of this double ensemble and McLaughlin's previous expansions of the MO from it's original quintet format—(the addition of the London Symphony on Apocalypse (Columbia Records, 1974) and that same base quintet augmented to dectet on Visions of the Emerald Beyond (Columbia Records, 1975) with the additions of string trio and 3-piece horn section). What quickly becomes apparent though, are the advantages that nine virtuosic, improvisation-capable musicians have over a quintet with orchestra (or mini-orchestra) in tow. At very least, it's an added boon to have so many different talented voices to turn to in such solo-rich environs. At best, this ensemble may represent the most capable expanded vehicle for this material yet—and McLaughlin definitely uses it to great advantage.

Playing-wise, McLaughlin himself is in solid form on Live in San Francisco, searching, finding, pushing, then soaring. He doesn't sound like a 70-something legend getting ready to retire but rather a vital contender with an added half-century of gravitas behind his notes. That said, Jimmy Herring is a shrewd choice for tandem guitarist for this project. Not only does he share the sizable guitar load but his playing is a refreshing foil in style, tone and texture to McLaughlin's. Moreover, Herring has the chops and exploratory fearlessness to go toe-to-toe with McLaughlin (not to mention such honest love for the repertoire as to occasionally insert subliminal homages to McLaughlin's original solos into his own).

Other fruits of this double ensemble abound here as well. Though never appearing in MO editions, the dual-drummer format is a major enhancement, at least with drummers as talented and sensitive as Ranjit Barot and Jeff Sipe. Having both Gary Husband and the lesser-known (but wonderfully adept) Matt Slocum on keyboards really adds to the firepower and overall sonic largesse, but there's also no denying they boost each other's performance—(see their scorching trades on "Trilogy"). Having two bassists can be a decidedly dicey proposition, but the absence of bottom-end muddle suggests there were clear delineations of duties negotiated beforehand. And although the bass role in the MO was traditionally (and necessarily) one of anchor, this 9-piece provides for such multiple reinforcement that bassists Etienne Mbappe and Kevin Scott are free to occasionally take flight also, with some remarkable moments surfacing from both throughout. The only role not doubled outright was that of violinist—a responsibility handled impressively by multi-instrumentalist Jason Crosby. Also occasionally adding vocals and supplemental keyboard, he may indeed be the surprise MVP of the recording. His essential and thrilling violin performances—especially on "Lotus on Irish Streams" and "Earth Ship"—clearly put him on a par with the formidable former holders of that key MO chair.

The titles chosen for this set, while obviously not being able to comply with every rabid MO fan's wish-list, include plenty of obligatory stalwarts (such as "Dance of the Maya," "Birds of Fire," "Meeting of the Spirits" and "Eternity's Breath") and are bound to satisfy. So too the tackling of the epic "Trilogy," with its 13 minutes of compositional twists, turns, and windfalls of virtuosic displays from all members, is sure to please even the most jaded MO-head. More notable though are a couple wonderful inclusions from Visions of the Emerald Beyond's oft-neglected B-side, "Be Happy" and the ethereal "Earth Ship"—the latter providing some of the album's most contemplative moments as well as lovely contrast to the ample gravity and heat on Live in San Francisco.

As rewarding and vital to the success of this album (and indeed these concerts) as the presentation of faithful, incendiary versions of this material may be, it's the departures that kick the whole up a notch. The konnakol injections "Be Happy" and "Trilogy" receive are as exciting and seamless as they are symbolically integral to McLaughlin's post-MO career. Also exciting is the treatment of "A Lotus on Irish Streams," in which the original acoustic, meter-less, chamber-like piece is recast into a flowing electric ensemble vehicle; underpinned by a dynamic rhythmic framework and augmented by a middle improv section, all without sacrificing the tender beauty of the original. The final and arguably most important "departure" is what this assemblage brings to these interpretations. While maintaining a tangible reverence for the originals, they imbue these songs with their own stylistic fortes to marvelous effect, making this feel less a tribute than a re-awakening.

After hearing this album, one can only speculate why McLaughlin waited so long to revisit the treasure trove of groundbreaking MO material. To many, it seemed as if he was channeling his mentor Miles Davis' refusal to look back. Perhaps, like Davis, it was something he would only do as a big finish to an illustrious and relevant career. Perhaps revisiting the material wasn't enough if it couldn't be further elevated. Perhaps the type of realization promised by the talents in this double-group configuration finally represented the offer McLaughlin couldn't refuse. Or perhaps it was just time...

Live In San Francisco suggests that all of the above may be true.

Meeting of the Spirits; Birds of Fire; A Lotus on Irish Streams; The Dance of Maya; Trilogy; Earth Ship; Eternity’s Breath Part 1 & 2; Be Happy.