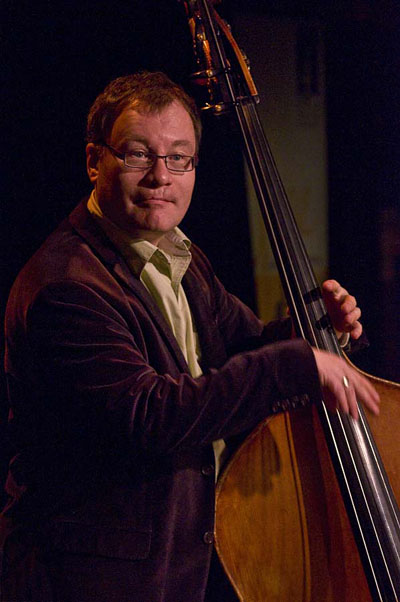 Following up his CD release party for Across the Sky (Plunge, 2010)—a quartet show that, featuring the effervescent saxophonist Donny McCaslin, burned up the stage at Ottawa's Fourth Stage in the National Arts Centre, bassist John Geggie returned with the fifth installment of his annual Geggie Concert Series with a group of high profile Canadian horn players (and one American). It was a rare occasion for the bassist—a local treasure gradually gaining wider recognition—to bring a larger ensemble to his series; in this case, one that featured enough linear instruments to create rich harmony but left plenty of freedom during solo section, unhindered by the more inflexible harmonic contexts created by chordal instruments like piano, guitar or vibes.

Toronto trumpeter Lina Allemano is no stranger to Ottawa, playing in nearby Wakefield, Quebec at the Black Sheep Inn regularly with her longstanding Lina Allemano Four. A trumpeter of strong range and clarity, she's also a fine composer, as her appropriately titled "Fidget" demonstrated, half-way through the first set of Geggie's show on March 6. Allemano also possesses a range of tonality, from velvety warmth—even in the upper register—to a tarter edge, and even a bit of grit when called for. On a tune that, with Geggie and Montreal drummer Isaiah Ceccarelli in the engine room, recalled bassist Dave Holland's 1980s quintet with Canadian expat trumpeter Kenny Wheeler—certainly a touchstone for Allemano—it also featured a solo from upstate New Yorker, trombonist/educator Bret Zvacek, whom Geggie met in his part-time capacity as a teacher at SUNY Potsdam. Zvacek demonstrated a powerful blend of accuracy and articulation, in a solo that wound its way through the changes with melodic precision.

Two more Montrealers fleshed out the sextet. Alto saxophonist Rémi Bolduc is another regular to Ottawa stages, especially during the festival season; a mainstay of the Montreal-based Effendi label, Cote d'Ecoute (2005) demonstrated his more chamber jazz proclivities, while 4+1 (2008) was a fierier, bop-centric date featuring guest saxophonist Jerry Bergonzi, an ideal foil for Bolduc's simmering heat. At Geggie's show, Bolduc also demonstrated his alignment with the jazz tradition on his set-opening original, "Mr. B.B.," a clever rework of the standard, "Bye Bye Blackbird," layering a solo that began in restraint but gradually took off with the kind of energy local fans have come to expect .

Tenor saxophonist Joel Miller's reputation has, like that of his compatriots, been on an upward trajectory, in particular with his Mandala project—first on the folk-informed Mandala (Effendi, 2005) and, more recently, on Tantramar (ArtistShare, 2007). His "Boogie Gaudot," which closed the sextet's first set, was an episodic piece filled with rhythmic, melodic and harmonic twists and turns. In addition to his own solo—a curiously greasy intellectualism in its emphasis on both the visceral and the cerebral—Geggie took a solo that, as with his other recent work, continued to affirm his growing confidence, oblique lyricism and increasingly muscular tone. Not all shows in the Geggie Concert Series swing, and this show was by no means restricted to any kind of convention, but the bassist and Ceccarelli sure laid down one hard-swinging groove when the music demanded it.

What also made the performance noteworthy was that, while there was no shortage of solo space for everyone, these largely original tunes were far from being just heads set up to introduce plenty of soloing. Most of the four songs that comprised the first set featured only two soloists (three at the most), though towards the end of :Boogie Gaudet," a repeating figure set up a context for the four horns to engage in increasingly free and escalating interplay that provided the set's most thoroughly exciting moments. 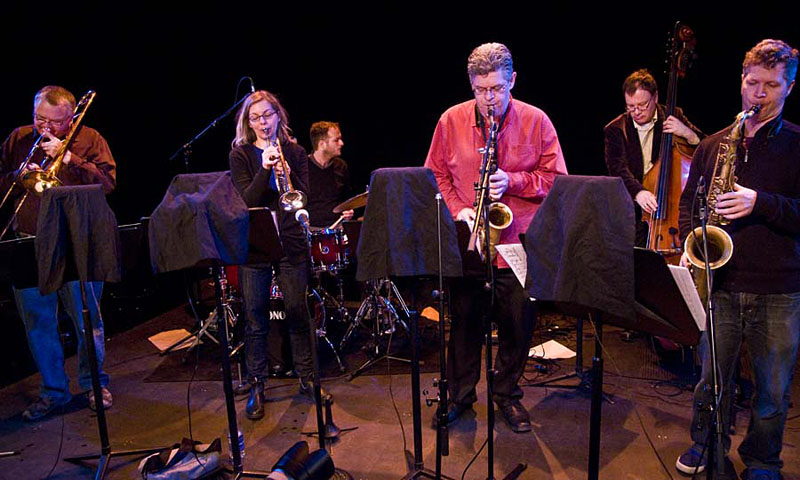 Sadly missing the second set out of necessity, it would have been wonderful to hear such music for hours on end. But in a little under one hour, Geggie and his collected group of Canadian and American partners delivered a set that, like every show in the Geggie Concert Series, distinguished itself. It's hard to pick shows that top others, because they're often so different and well-conceived/executed, but for an evening of tight charts and uniformly excellent soloing from a larger-than-usual ensemble, this was certainly one that will be remembered by Geggie's near-capacity crowd.