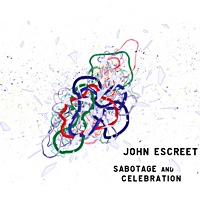 Doncaster born pianist John Escreet recorded this exhilarating modern jazz record in his adopted home of New York on 7 November 2012 informed, he has said in a recent interview, by two events. The first, Hurricane Sandy, was responsible for his incarceration in his Brooklyn apartment for long enough to write and fine tune the material for this collection, while the second was the increasingly polarised US political situation in the lead up to the 2012 Presidential election itself held on the night before the session.

Whether or not we read this as a reverse justification for the instinctive, the title track of the collection perhaps illustrates Escreet's point the best. The initial section of piano and strings gives way to a free squeal before settling into a wonderful section that begins with Escreet soloing before swapping back and forth with the stellar horns of David Binney and Chris Potter. The feel is of a game of tag—Escreet and the horn section swapping back and forth at one time inserting an angular rhythmic riff or intervention, reminiscent of Troyka's "Dropsy," the other covering it with energetic, rhythmic solos. The solos themselves feel like the introduction of a disruption to a tight rhythmic system or structure—sometimes celebratory but arguably also working against and 'sabotaging' the established patterns. The impact is thrilling and must be among the finest modern jazz tracks of the year.

This idea of the introduction of elements of disruption or conflict into the music occurs throughout the collection. Take for example the wonderful segued opening pair of "Axis of Hope" and "He Who Dares." The strings start "Axis of Hope" off gently enough before a contrary theme emerges, which prefigures the disruptions to come from the core band after the segue into "He Who Dares." The latter is fantastic, one of those tracks that make you stop whatever you happen to be doing and just listen. The solos build and release tension around a memorable, filmic, main theme setting up a final disruption to the proceedings that sounds like an acoustic attempt to play a techno glitch—an analogue portrayal of a digital ghost perhaps? Melodic enough to satisfy the more open minded Thelonious Monk fan, yet angular and forward looking enough to grab the attention of a modern jazz crowd, it is an absolute triumph.

And so it largely is across the rest of the collection too. All of the pieces have merit whether they be the more soulful "Laura Angela," where Escreet switches to Fender Rhodes, or the way that "Animal Style" resolves its dialogue between patterns into the fab celebratory horn segment at its conclusion. "Beyond Your Wildest Dreams" allows Binney to swap to soprano saxophone and adds Adam Rogers on guitar plus three vocalists to great effect.

Escreet had nothing to prove with this collection, his previous albums were all great after all, yet here he has surpassed all expectations. Such is his work rate that the next record (with John Hebert, Tyshawn Sorey, and special guest Evan Parker) is apparently already complete, but for now Sabotage and Celebration marks a new personal artistic peak and one of 2013's finest modern jazz records into the bargain.