By Hrayr Attarian
December 20, 2013
Sign in to view read count 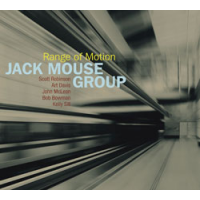 Drummer and educator Jack Mouse has a versatile and prolific career. In addition to playing, among many others, with trumpeter Clark Terry, saxophonist James Moody and pianist Stan Kenton he has been actively involved in education as a faculty member at various institutions and as a writer for percussion magazines. His debut album Range of Motion comprises ten of his originals that exhibit a variety of influences and are in a number of different subgenres.

With the exception of the free flowing "Loose Weave," Mouse and Robinson's haunting, melancholic spontaneous duet, on the remainder of the disc, the individual band members to not wander far from the main tunes. The pieces are, nevertheless, quite enjoyable and intriguing each in their own way.

"Mannerism" is a clever and engaging conversation between bassist Kelly Sill and the rest of the group that also allows Sill time in the spotlight for crisp, tight and intelligent ad-lib expressions. Robinson's soprano emerges with a cool exuberance and a blues tinged swagger while earthy grooves mark McLean's soulful strings. The delightful and fusionish "Hip Check" features Davis' blowing passionate and elegant phrases over the band's loose, swaggering swing. Out of this laid back and engaging ambience emerges Bowman's intensely lyrical bass solo.

An accomplished musician Mouse's freshman effort is a mature and entertaining work. Despite being low on improvisational rigor and innovative concepts, the record is appealing and refreshing thanks to Mouse's compositional skills and the high caliber artistry of all involved.