By Mark Sullivan
June 8, 2021
Sign in to view read count
After more than a decade of advocating new and creative approaches to the guitar, the New York-based Alternative Guitar Summit is branching out with a guitar-centric record label called AGS Recordings. Its pair of inaugural albums come from the label co-founders Joel Harrison (also the founder and director of the Summit) and Anthony Pirog (a frequent performer on the Summit).

Joel Harrison's Guitar Talk focuses on original guitar duets with some interesting exceptions. The ballad "It Falls On You" opens the set with a guitar trio with Harrison, Steve Cardenas and Ben Monder. Monder's duet "Autumn in Olivebridge" features his usual style—more electronic and abstract— culminating in a final soundscape section. The two duets with Pete McCann—"Sunday Night With Vic" (dedicated to the memory of the late Vic Juris) and "Rebound"—have the most traditional jazz guitar duet sound,but are no less vibrant for it.

More than any other electric bassist, Steve Swallow truly treats his instrument like a bass guitar. As soon as he moved from double bass to the electric instrument, he began playing with a plectrum, and his sound has become increasingly individual over the years. Harrison's "Song For Steve Swallow" naturally features the bass, while "I Keep Asking the Question" shows the two instruments in an equal conversation. David Gilmore appears on just one track, the brilliant (if perhaps ironically titled) "Black Mountain Breakdown."

Harrison plays two solos to end the album. Duke Ellington's "Reflections in D"receives a reflective interpretation which is truly solo: no electronics other than reverb. But "America the Beautiful" is an abstract treatment of the song with maximum electronics, including bit-crunching and looping.

The entire album—which shares its title with Harrison's new book of interviews with 27 visionary guitarists coming out on Terra Nova Press—is full of gorgeous melodies and great guitar playing. 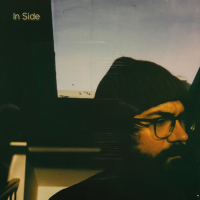 Anthony Pirog
In Side
AGS Recordings
2021

Anthony Pirog's album In Side comes out of the tradition of "solo" guitar albums that freely employ overdubbing—like John Abercrombie's Characters (ECM Records, 1978), Sonny Sharrock's Guitar (Enemy Records, 1986) and Bill Frisell's Ghost Town (Nonesuch Records, 2000). Its 16 tracks are compact: the longest clocks in at four minutes, and several could be described as miniatures. "Cloud Forest" and "Dew Drop" open the set with a breezy melodicism in Americana mode. "Janel" has a similar feel, but the song-like melody is accompanied by ghostly backwards guitar. This tune is also 20 years old, unlike most of the music here, which was composed during the COVID-19 pandemic.

The miniatures begin with "Mood Current," an edgy soundscape including what sounds like radio static. "Mirrors and Mirrors" uses a sequencer sound to create an electronic atmosphere, but "Catania Piece" and the closer "Anniversary Theme" are both short melodic statements.

The program is rounded out by two cover versions that Pirog has been playing for years but never found a place for on earlier albums. Mel Tillis and Fred Burch's "Strange" is associated with singer Patsy Cline. The melody is played on electric guitar, with acoustic and electric guitar accompaniment. It's easy to imagine Bill Frisell playing it like this. Horace Silver's "Peace" is played with a respectful chord-melody arrangement: short, simple and the most traditional track.

In Side covers a lot of ground in its relatively short running time, showing many sides of Pirog's playing and composing.

Tracks: It Falls On You; Sunday Night With Vic; Autumn in Olivebridge; Rebound; I Knew Right Away; Song For Steve Swallow; Winter Solstice; I Keep Asking the Question; Black Mountain Breakdown; Reflections in D; America the Beautiful.

The Music Outpost · Anthony Pirog, "The Shape Of Rain" from 'In Side' (AGS Recordings)