By Dan McClenaghan
June 8, 2021
Sign in to view read count 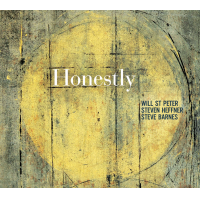 Henry Mancini's song "Days Of Wine and Roses" is a classy bit of music. Written for the 1962 movie of the same name, it was much recorded, most successfully by vocalist Andy Williams. And, for jazz aficionados, guitarist Wes Montgomery served up a superb version on his Boss Guitar (Riverside Records, 1963).

The album Honestly, by guitarist Will St Peter, bassist Steven Heffner and drummer Steve Barnes, opens with the Mancini gem, in a fashion more understated than Montgomery's; taken at a slower, more meditative pace, It sounds like a whispered, three- way conversation, each instrumental part distinctly executed in service to the group dynamic. A gentle rendition which, in its subtle way, commands attention.

With that same style, the trio covers Sammy Kahn's "I'll Be Seeing You," Alec Wilder's "Blackberry Winter," and Ornette Coleman's "Turnaround," which wraps the album up with a subdued but insistent jazz swagger.

Guitarist St. Peter includes three tunes from his own pen, the lighter-than-air "Driftwood," the piquant "Windsor," and the initially dreamy "Authenticity"— which cranks things up into a tangy groove four minutes in. And "Authenticity" could be used to describe the unpretentious, straightforward style of the St. Peter/Heffner/Barnes trio's way of playing. It would not be out of place as background music at the outdoor patio of a backcountry winery, making art that would— during lulls in conversation—draw the attention of the place's patrons, a dynamic that could go into a loop, with less talking each time around, and more sounds—until there was no conversation at all. Just music.

About Will St Peter