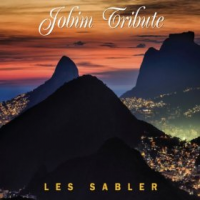 Canadian guitarist and vocalist Les Sabler is accustomed to playing the lighter side of jazz as an established and prominent Smooth jazz artist with a particular fancy for the bossa nova. On a very special homage album, Jobim Tribute, the guitarist provides a delicious taste of Brazil by exploring select music from Antonio Carlos Jobim, arguably, one of the greatest composers and innovators of the Brazilian genre. It is also important to note that 2014 marks the 50th anniversary of Jobim's signature tune "The Girl From Ipanema" included in the March, 1964 release of Getz/Gilberto (Verve, 1963) featuring Stan Getz, guitarist Joao Gilberto and Jobim on piano, and coincidentally, in December of the same year (2014), will also be the 20th anniversary of Jobim's death.

Accordingly, Sabler concluded that presenting a heartfelt soulful celebration of the master's music would be an appropriate way of expressing gratitude and appreciation for the work of the legendary Brazilian composer. Though clearly a tribute to a giant of the music, and a well-designed one at that, Sabler makes it interesting by not including standards like "The Girl From Ipanema" or oft recorded Jobim compositions such as "Wave," "Agua de Beber," "Desafinado," "Dindi" or "Meditation" among others instead, featured here are lesser-known Jobim songs that have stood the test of time and are offered here with Strings and an ensemble background of both friends and new acquaintances.

The celebration opens with a string-laden version of "A Felicidade" followed by a beautiful soft take on the classic "Corcovado (Quite Nights of Quiet Stars) with Sabler voicing the lyrics in both English and Portuguese, picking the guitar and bass and accompanied by a delicate solo from keyboardist Clay Perry. A gorgeous and lesser-known tunes is "Esquecendo Voce," a brief but warm instrumental piece backed up by the string quartet arranged by Allon Sams. The sweet "Bonita" is certainly one of the highlights of the album featuring Sabler and Olivia Keaggy sharing vocals on the love song of the set as is the instrumental and percussive "Brigas Niunca Mas/Discussao showcases Celso Alberti on drums and the late Joe Lala on percussion.

Providing vocals in Portuguese, playing a light guitar and supported by the Tom Zink—arranged string quartet, Sabler's treatment of "Fotografia," develops into the standout song of the album. The leader does a little solo of sorts as he sings and plays his guitar on "Por Causa De Voce" with the only back up music provided by the Strings, then by contrast, follows with a lively read of the usually light-styled "Triste."

The music winds down on two instrumental pieces, "Janelas Abertas" and the more familiar "Chega De Saudade," capping off a warm and tender musical portrait of Antonio Carlos Jobim. Les Sabler delivers a winner on Jobim Tribute as he salutes and remembers a man and his music with a measure of taste and a touch of class, on one of the most compelling and engaging tribute albums to a legend.