By Andrew Velez
February 20, 2008
Sign in to view read count

Nobody in the whole world of jazz music or modern music for that matter sings with any more heart and soul than Jimmy Scott. Nobody!
—Todd Barkan

"Jimmy had soul way back when people weren't using the word," observed Ray Charles. Even though through the years he's inspired champions like Quincy Jones, Lou Reed, Elton John and director David Lynch, NEA Jazz Master Jimmy Scott's career has been a rollercoaster for over seven decades. He's unlikely ever to become a household name and yet scores of singers have been influenced by his powerfully emotional style and uniquely expressive phrasing, among them Marvin Gaye, Stevie Wonder and Frankie Valli. Nancy Wilson, who recalls hearing his recordings of "Everybody Needs Somebody" and "The Show Must Go On" at age ten, says flatly, "[For me] I think that's when the whole thing started. ...I still sound like Jimmy Scott."

Born in Cleveland, Ohio in 1925, the third oldest of ten children, by age thirteen Scott was manifesting the physically-stunting effects of Kallman's Syndrome, a hormonal abnormality which left his voice with what has become his trademark high pitch. At almost the same time he suffered a life-defining loss, the sudden death in a horrific accident of his beloved mother, Justine.

Yet today Scott remains a diminutive man of remarkably good humor with a sagacious child's face, whose remarks are frequently punctuated with laughter, uh huhs and exuberant yahs. Recalling his mother he says, "She did everything a person could possibly do to keep her family together. [When] I see that in other people, of course it takes my mind right back to her. She took time with each of her ten children. Uh huh." Among his earliest musical memories are of his mother playing piano by ear. And of a music teacher, Mr. Todd, who taught him to drum, which he credits as giving him "the inspiration to incorporate the time of music in my vocal expression. That to me was another great beginning for me." 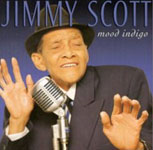 "We didn't have a lot of money for buying records. So all right. But there was radio. Bing Crosby, Woody Herman and Tommy Dorsey. I could hear all of them. ...They were all a part of the inspiration for my work. ...I used to go to the 5&10 store. There was a magazine of all the songs that came out. I'd pay a quarter for it. It had the lyrics to keep up with the songs coming out. ...I'm not big on reading music. The bands [I worked with] helped a lot. Members of the band sort of shared their experience with me. And that was cool you know. It was a blessing."

Another "blessing" occurred in the late 1940s, when Lionel Hampton came to a club where Scott was appearing in Milwaukee. Soon thereafter he called him to join him in New York to appear with his band. Around the same time Scott recorded what would become one of his signature songs, "Everybody Is Somebody's Fool," that was brought to him by a fan when he was working at the Apollo. During that period Scott recorded other sides for Savoy Records such as "Everybody Needs Somebody" and "Anytime, Anyplace, Anywhere." They remain in print, though he has made very little money from them. He speaks of "unfair deals," stating simply, "Well, I wasn't the only one who was treated unfairly. ...There were other kids who were mistreated just like I was. OK. It hurt because it confused everything and I couldn't get a positive position as far as recording."

Despite all of the difficulties and downtimes he's had in a career which has found him at times working as shipping clerk and janitor, Scott remains philosophical. He chuckles, saying, "The rent goes on. So you don't cry and complain. ...That's the way it goes, babe. You get off your rump and you do something."

Even during those long periods throughout the 1960s-70s when gigs were scarce he still sang. .."Sometimes I'd go to people's houses. ...One fellow wanted me to sing to his sister. He gave me a little tip. You know, fifty bucks. What the heck! So I went over to the birthday party and I just had a nice time. Hey baby, it put some food on the table."

In the late 1980s Scott recalls "running around New York with his friend, Doc Pomus," who he says kept going to clubs "telling them you got to hire this cat."

When Pomus died, Scott sang "Someone To Watch Over Me" at his funeral. Producer Seymour Stein heard him and signed him to Warner Bros/Sire, where another fan, Tommy LiPuma, produced All The Way (Sire, 1992), Scott's only Grammy-nominated album.

Not long afterwards, producer and jazz entrepreneur Todd Barkan, who first met Scott in Ohio over thirty years ago, produced a quartet of recordings for Milestone, sure to be an enduring part of Scott's musical legacy. Barkan presented Scott at the famed Keystone Korner in California in 1990 and subsequently introduced him to Japanese audiences at Keystone Korner Tokyo. "I helped bring him back," he says with pride, noting that Japanese audiences continue to appreciate Scott.

About their sessions Barkan says, "I've produced a lot of recordings. ...Nobody in the whole world of jazz music or modern music for that matter sings with any more heart and soul than Jimmy Scott. Nobody! ...He's had a profound influence on popular music that isn't discussed a lot. He had an influence on Jackie Wilson, which in a way had a profound impact on Michael Jackson. ...He is the poet laureate of the heart. He opens his heart and his music comes out."

So why hasn't he achieved greater fame? Barkan observes, ..."A part of it is the media really giving him support. ...His music has an intensity and an uncompromising idiosyncratic core that is not necessarily for everybody. ...He's just a man of such uncompromising honesty and intensity in his music. And that's not necessarily pop pablum. He has a very devoted fan base and audience. Every great artist is not necessarily a mass appeal. They did a magnificent job with All The Way. That was his second coming in terms of any kind of popular appeal. He's an artist of lasting import and enduring relevance—one of the giants of jazz singing. But you should point out that Billy Eckstine [also] felt he never achieved the proper level of public acceptance. So male jazz singers have that cross to bear and have had that over the years."

Barkan, who's hoping to record with him again, recalls a comment guitarist Joe Beck made during the Milestone sessions. "He said one thing that was extremely revelatory about Jimmy Scott musically. 'When you're traveling with Jimmy Scott you have to have musical patience and faith.' It was echoed by Grady Tate and Cyrus Chestnut, as we were just sitting in awe of how he approaches a vocal." Expressing awed admiration Barkan continues, ..."You start at one musical intersection with him, traveling down this musical road with him. He may turn into an alley, down another street, around another park and back in another alley and he's still going to arrive at the next major intersection at exactly the same time you are. You might not see him for a second. But you can't rush. You just gotta have faith in time that he's going to be there with you. Because he's so free, so emotionally unfettered and he's swingin' all the way! It's never in a corny, obvious way. But, he's doing it his own way. That's what makes him the great artist he is. ...He may never achieve what Ella did in terms of reaching the masses of people, but the people he does reach he touches every bit as deeply as Ella or Sarah or any great singer."

Scott's musical director and bassist for nearly twenty years, Hill Greene, regularly accompanies him with his group, The Jazz Expressions. He calls Jimmy "the most open artist as far as letting people that are with him develop their own way. ...He's certainly steeped in jazz. ...He also grew up singing lots of gospel music. ...And then he's also really listened and hung out with other major musicians. Milt Jackson, Charlie Parker—people of that caliber. ...I continually have enthusiasm to work with him. ...He's got a way about him that evokes something special out of people."

"A joy and [to] share the experience of the music," is what Scott says he wants for his listeners. .."And if they do that it will be because my love for the audience and the music will have an equal standing in my life. And I hope it will have the same in their life. Uh huh. ...I'll never give up, baby. I can't think of giving it up. Uh uh."