By NENAD GEORGIEVSKI
October 31, 2020
Sign in to view read count 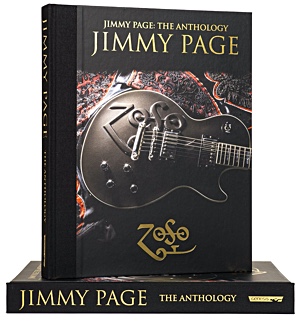 Just like the custom built Black Zoso Les Paul Gibson adorning the front cover, Jimmy Page: The Anthology is a lavishly crafted artifact that celebrates Jimmy Page's long and illustrious career. The Anthology is the third official book from Page together with Jimmy Page by Jimmy Page (Genesis-Publications, 2014), where he opened his archives and presented his visual autobiography, and Led Zeppelin by Led Zeppelin (Reel Art Press, 2018), where along with the two other remaining band members he presented the band's visual biography.

The Anthology represents a cabinet of curiosities and is yet another journey in images and words into the creative world of musician and cultural icon Jimmy Page. Curated by Page himself, the book has the person-to-person feel of going on a private tour of the artist's archive as he himself makes real-time discoveries and presents "the detail behind the detail." The book represents partly a memoir, partly a self-curated catalog. It's a highly organized torrent of images that offers an access-all-areas peek into his life's work, featuring a plethora of guitars, other instruments, gear, effects, garments, lyrics, posters, set designs, artwork, personal notes, previously-unseen photos, and more. This book represents another visual history of Page's life and is annotated by him with great insight and detail.

In regard to Page and the iconic band Led Zeppelin, we tend not to think of them as actual human beings. A large factor in Page's legacy as a musician was always his enigmatic public perception. Even after all these years, he remains a figure of mystery and intrigue. One of the things that have made him and the band so special is that they let their music speak for them. This is so unthinkable in today's social media-saturated world. As a result, up until these books, little survives in the way of actual insight, from the band, in terms of what happened, how it was done. But the Anthology provides plenty. It offers a lot of detail for everyone, from the Zeppelin aficionado, the gearheads, to the casual fans. There is plenty of information here to absorb, regardless of the reader's familiarity with the stories that lie behind. Behind each photograph, item, story, there is an equally fascinating artistic process not originally intended for public view.

At first glance, this handsomely illustrated volume covering the history of the much-revered Jimmy Page might look like just another coffee-table book. However, there's far more to it than that as immediately becomes clear. Page navigates the readers through the various stages of his life and admittedly already well-documented career, spicing the text up up with interesting and insightful comments. While the main storyline follows Page's lifetime and career, actually, there are several stories that run parallel to each other. There is the snowballing effect of how his fascination with music and instruments (not just guitars) has led him from one chapter to another, starting from being a music aficionado, beginnings with the guitar, first bands and session work—all culminating with the Led Zeppelin chapter when he put into use all of his talents as a writer, musician, producer, bandleader and arranger. The story line doesn't end there, continuing to follow his career and events up to the present day.

Long before he even conceived the idea of Led Zeppelin, Page was carving a name for himself as one of England's most talented session musicians. He was a much sought after session musician who has made an enormous impact on popular music by playing on hundreds of sessions in London at the time. Thus he equipped himself with a formidable array of different guitar techniques that a session player might be called upon to demonstrate. It is his guitar that can be heard on hundreds of sessions in the mid-'60s, featuring on songs by The Who, The Kinks, Rolling Stones, Van Morrison, Burt Bacharach, Jeff Beck, and Eric Clapton, to name but a few.

When thinking of Jimmy Page during his times in Led Zeppelin, most probably the first guitar that comes to mind is either the Les Paul, which he referred to as "Number One" or the double-neck which was used when he played songs such as "Stairway to Heaven," "The Songs Remains The Same" and "Rain Song." But the book presents all of the guitars from his arsenal from his first professional steps to the present day, often with the garments he used at different times, and more besides. There are photographs from every period of Page's career and there are also some fascinating sidelights thrown on Page from unusual angles, providing welcome fresh perspectives. All of the instruments and memorabilia have been specially photographed under his direction.

Jimmy Page: The Anthology is a magnificent book, beautifully designed with strong, arresting graphics. It's difficult to overstate the importance or the beauty of the illustrations throughout this narrative. This book both embodies and enriches our understanding of how Jimmy Page the artist came to be and illuminates why his music continues to matter to so many. No book could ever offer direct access into why Page wrote the music that he did, but The Anthology at least can provide some greater understanding of the "what" and "how" behind the artist.