Jim Beard And Jon Herington At The Kennett Flash 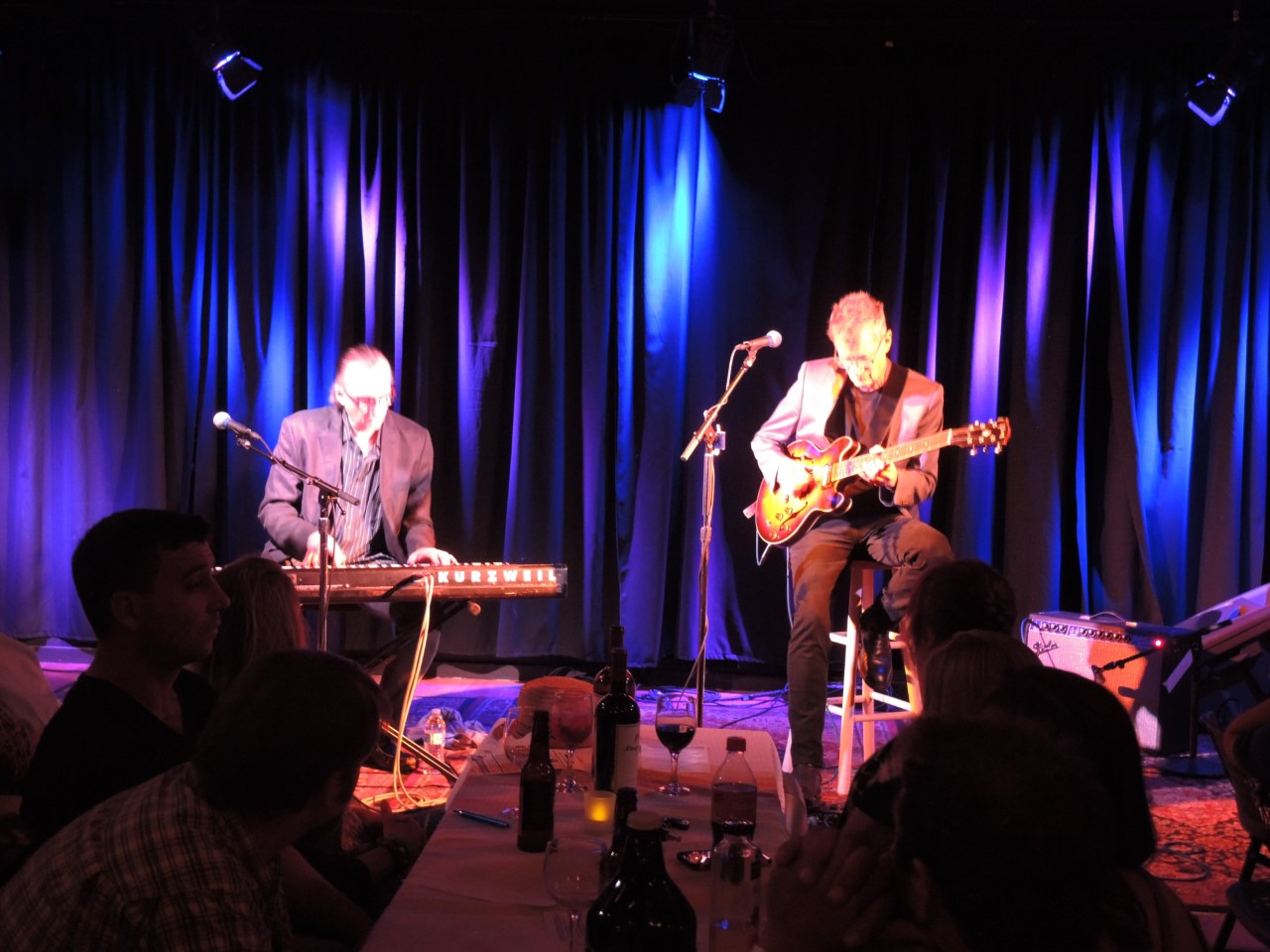 Nestled in the small town of Kennett Square Pennsylvania, the Kennett Flash is a bit of an anomaly these days— and a welcome one at that. It's a small non-profit venue for the arts, able to hold no more than 100 people, set up with family-style table seating. With its intimacy and solid turnout this night, it also seemed an ideal setting for the maiden gig of the Jon Herington / Jim Beard Duo.

Though they are longtime friends and have played on many of each other's projects (and have been together in Steely Dan's employ for nearly a decade), this was the first time just the two of them have shared a stage in public.

Drawing largely on instrumental material from their own solo catalogs, the two, sans computers drum machines or loopers, provided a lesson in just how much music can come out of just a piano and guitar..

Beginning with "Camieff" (Beard's spritely opener from his 1990 debut album Song of the Sun) they set the bar fairly high immediately, somehow rendering all of the original's essential rhythmic drive—without a rhythm section. Going next into a reworking of "Behind the Mask," (from Herington's 1990 debut The Complete Rhyming Dictionary*), it became clear that, however lush the original source material, they found ways to keep the musical impact just as large—even if the band wasn't.

That's no small achievement, seeing as the bulk of their musical portfolios are marked by beautifully uncommon complexities in composition and arrangement. The fact that these not-so-simple gems—(tunes such as "Chunks and Chairknobs," "Hand To Hand," and "Holiday For Pete and Gladys) -comprised the lion's share of the set was remarkable in itself.

Some selections, albeit no less interesting ones, were a bit more obvious for a duo setting. A solo arrangement of Beard's "A Gentleman and His Caine" had appeared on his latest piano-only effort A Show of Hands, but it's seemingly free-form ebb and flow made it all the more wondrous for another musician to successfully lock into. Herington's "Whoopie Tie O," driven by a rigorous rhythmic guitar figure, was played with such stand-alone aplomb that it freed Beard to do additional colorations and textures.

Interspersed among these demanding (though wonderfully played) tunes were a few standards that allowed a bit more freedom and exploration for the pair. Among these were a nice take on Fats Waller's "Ain't Misbehavin,'" a captivating turn on pianist Bill Evans' "Loose Bloose" and a good old fashioned blues romp. These were a nice counter balance to the solo material and afforded ample opportunity for improvisation. These also yielded some of the most inspired soloing of the evening from both players.

But perhaps the night's biggest crowd pleasers were a couple of stellar pop tune arrangements. With a nod to their current employers, the choice of Steely Dan's gorgeous "Gaucho, " was as inspired as it was beautifully executed. The evening's encore, a masterful and truly fun rendition of Brian Wilson's classic "Good Vibrations," was a surprisingly perfect closer. Amidst its familiarity and infectiousness was a final reminder of not only how much facility lie in the mere four hands playing onstage, but how artful the vision of two musical hearts and minds that drove them.

Kudos to the Kennett Flash for providing a launching pad for this great duo project.

* Reissued and retitled in 2009 as Pulse and Cadence.