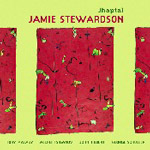 A Berklee and New England Conservatory graduate, guitarist Jamie Stewardson spent time gigging with jazz legends George Russell, Jimmy Giuffre and Mat Maneri after paying his dues backing up pop and soul acts on cruise ships. With a stellar backing band and a solid release to his name, Stewardson's days supporting road weary Motown acts should be a thing of the past. Jhaptal is Stewardson's second album as a leader.

As a soloist, Stewardson favors a bright, slightly overdriven, but undistorted electric guitar tone, with an economy in his phrasing that belies his virtuosity. Joining him on the front line is pervasive Downtown tenor saxophonist Tony Malaby, who plays with surprising restraint. Capable of torrid frenzy and multiphonic hysteria, Malaby plays it cool, illuminating the written material at hand. At times he blends so seamlessly with Stewardson during unison passages that they sound like one instrument. Vibraphonist Alexi Tsiganov contributes shimmering comping and ebullient solos, enriching the entire session with his lilting phrasing. Ubiquitous bassist John Hebert and stalwart drummer George Schuller lock tight into the odd-metered grooves, playing with restraint and simmering energy.

Focusing on mid-tempo rhythms with epic-length melodic phrases, Stewardson's compositions lend themselves to extended development. Varying their attack with subtle coloration and vacillating dynamics, the musicians bring as much heart-felt dedication to introspective balladry as they do punchy verve to harmolodic funk.

On this promising effort, Stewardson demonstrates the kind of creative potential that so few seem capable of in mainstream jazz.