BY GLENN ASTARITA
June 5, 2018
Sign in to view read count 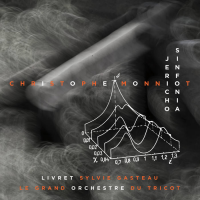 Prize-winning French composer / saxophonist Christophe Monniot and Le Grande Orchestra du Tricot impart the element of surprise on this rapidly moving endeavor that includes spoken word dialogues at various intervals throughout the program. However, all the text is presented in French on the CD package, and the same is true for the spoken word narratives. Yet Stephane Berland of Ayler Records summarized the storyline that references the Old Testament, a Pasolini interview, and a scientific take on vibration (wave mechanics) that could explain the myth surrounding the destruction of the walls of Jericho.

Monniot's brainchild merges experimental episodic motifs with modern jazz and even a few traces of trad jazz, as the improvisational quotient looms large throughout. Here, the orchestra builds upon layers along with subsets of performers re-engineering a given theme. Think of expansion and reduction tactics complete with regimented horns arrangements, staggered detours, circular patterns and forceful plot developments. Indeed, it's an agile band that works through manifold song-forms, injected with winding trajectories, false endings and ominous events in parallel with spoken word exchanges.

"Paix Nombres" includes a fractured rock pulse amid quietly soaring horns and orbital phrasings via complex unison choruses, chameleonic colorizations, Guillaume Aknine's distortion-tinged guitar riffs and drummer Adrien Chennebault's hard-hitting grooves. But there's so much happening on each track, it's hard to get a firm grasp on the big picture after only one or two listens. And while Monniot is teeming with clever ideas, complemented by his strong soloing, the musical paradigms occasionally spawn a sense of neuroticism. However, the orchestra does a nifty job of using melody as a framework for blazing improv activities.

The musicians tone it down a few notches on "Hymne 3," where ethereal interludes and Aknine's atmospheric guitar lines present the listener with a brooding sense of uncertainty as they casually reenergize with simmering crescendos. But the orchestra bounces back with a dynamic outbreak as the tempo seldom sits still, leading to stoic and malleable charts, uplifted with scorching odd-metered cadences. No doubt, Monniot is onto something truly special here. But the program warrants the audience's astute concentration and it's by no means an easy listening, finger-snapping jazz production.