BY JAMES PEARSE
December 19, 2013
Sign in to view read count 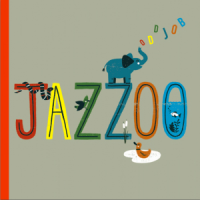 With five diversely themed full-length albums (all Grammy-nominated) under its collective belt, it was anyone's guess as to where Swedish jazz ensemble Oddjob would take its music next.

Oddjob's last release Clint (ACT, 2010) saw the quartet rework, reimagine and 'jazzify' classic Western themes by Ennio Morricone, Lalo Schifrin, et al. JAZZOO (Headspin Recordings, 2013) also works on a fairly familiar theme—this time that of jazz for kids—but does it with such gusto and inventiveness that there's something for everyone, regardless of age.

JAZZOO comes as a deluxe book and CD with music and illustrations designed to inspire children aged 2-6 years. The set contains thirteen musical stories based on a motley crew of animals illustrated by British artist Ben Javens.

Opening song "The Kangaroo" is—as you may expect from the title—a bouncy, fun and fast- paced number. Versatile multi-saxophonist Per "Ruskträsk" Johansson brings the Antipodean mammal's springy movements to life on a Jew's harp before trumpeter Goran Kajfes spits out a melody so catchy that it'll stick in your head for hours. And you won't mind.

"The Elephant" is a wild ride through the cartoon jungle led by guest-organist Daniel Karlsson's rhythmic keyboard playing, Johansson's funky brass, and deft breaks from drummer Janne Robertson. Fluted music for children of yesteryear—such as that of Henry Mancini or Swedish favourites George Ridel and Jan Johansson—is evoked on "The Squirrel" before another organ-fuelled trip comes along on "The Hippo," where bassist Peter Forss drives a breathy, funky jam.

There are many memorable moments to be cherished on JAZZOO. Not only are there all the increasingly creative ways to recreate the sounds and movements of the different protagonists but there is also a range of complex musical textures and fine musicianship, which will no doubt be appreciated by even the most seasoned jazz listener.

The Kangaroo; The Hedgehog; The Elephant; The Whale; The Squirrel; The Hippo; The Cockroach; The Shark and The Stickleback; The Woodpecker and The Nightingale; The Duck; The Horse and The Wasp; The Camel and The Snake; The Fly.