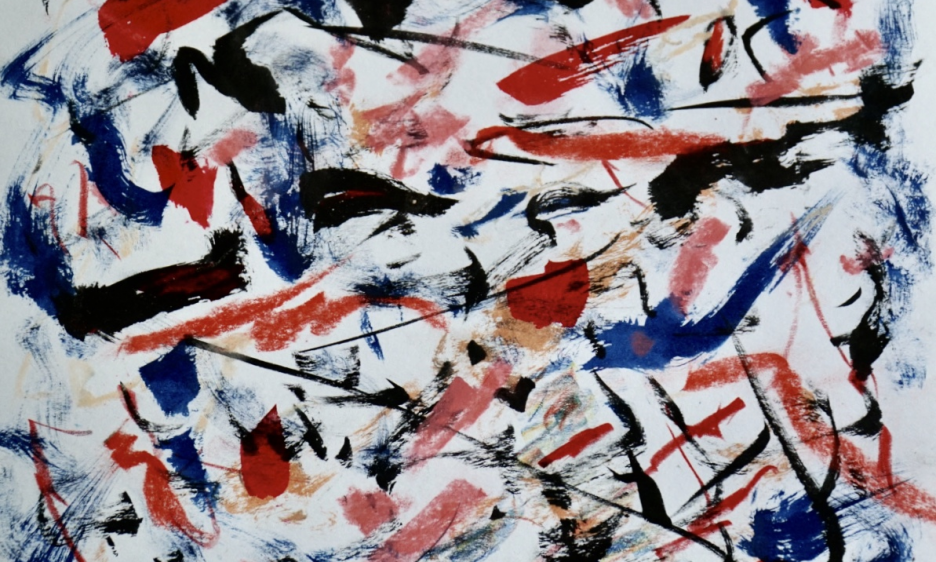 JazzArt Festival in Katowice, Poland, made its contribution to the annual international Jazz Day on April 30 with a live streamed performance by multifarious keyboardist Joanna Duda. Performing from her home (at Gdynia at the Baltic Sea) she utilized two electronic devices and sampler machines to unfold a complex electronic tapestry. As a way of note taking, I made five live drawings during the concert prompted Duda's performance. These were my first live drawings to a real time streamed musical performance. As I began to draw, I realized how masterful Joanna Duda executed the game of playful particles, thereby weaving a broken poly-and heterophonic piece of a very own breathing and speaking character. Duda performed this from the live sequencing, manipulating and orchestrating of the stock of samples of her work "Keen," which she released on the eponymous album in 2019. The performance can be viewed below.

The five live drawings you can view in the slide show here reflect certain aspects of Duda's dynamic creational process, although not in a point-by-point manner of picturing the ongoing process. Sometimes it is not possible to picture certain turns and dynamics visually at the original speed. In the series of five you can also see the tactic of spontaneously choosing different perspectives and techniques to illuminate certain aspects of simultaneously proceeding music. The music listened to apparently also pushed the drawing into its very own gestalt.

For me, personally, Joanna Duda's music making led me into some fascinating observations into the listening mind and its 'synthesizing' from Duda's coalescing game of playful particles. In the listener's mind it might be as balancing and dancing on a rope with moments of wonderful flow and grace and moments of losing balance and falling and climbing back. Listeners follow the musical process from their own perspective, their own inner time and resonance. A key factor for the creation of the music maker, the transmitting and the intake and processing by the listeners is likely to be the relationship between movement and forms juggled in that open game, in its special dynamics. The live drawings can possibly open an exchange between musicians and listeners about these open forms.

Live drawings are part of this year's edition and more work will be shown in an exposition at the Miastro Ogrodów (City of Gardens) arts center in Katowice. Examples of it you can watch in the video here accompanied by music of exceptional pianist Łukacz Ojdana, who was also scheduled to perform at the festival his enchanting album Kurpian Songs & Meditations (Audio Cave, 2020). The original drawings will be accessible at Miastro Ogrodów (City of Gardens) arts center gallery as soon as galleries are allowed to re-open again in Katowice.

At the moment of writing, we are still in the most serious and far-reaching forced stoppage and absence of public concert and events in known history, thus far. It all started full force in early March and will likely continue far into the fall or even into 2021. International traveling has come to an almost complete standstill now. As one of the early spring events JazzArt had no chance to unfold in its regular form and there was very short time to come up with virtual alternatives to digitally transmit via internet. This evening came into being in a network between different locations in Poland, The Netherlands and Portugal.

Since the inception of the Covid-19 lock-down measures, real time streaming of musical performances and recorded instances of music on internet has exploded into a boundless, confusing daily confetti. Although many know that 'online' is not a really desired and enduring alternative, there is almost no alternative at this moment for artists wishing to stay creative and maintain a public profile. Clearer lines, places, approaches and formats online and offline have to take shape the next 8-12 months. It will require major efforts.

For the time being, the ever growing, abundant output continues and is 'served' by a multitude of mainly online media. It will to a certain extent be continued as a phantasy ride in a shaky vacuum more or less oblivious to the realworld. However, more radical reflection and critical discussion of music making, presenting and distribution, real passionate and creative discussion of music experience and the music itself is most necessary now in order to cope with the current challenges successfully and with results of some moving quality.