By NENAD GEORGIEVSKI
September 11, 2016
Sign in to view read count 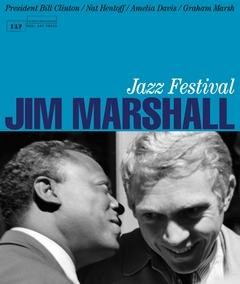 Regardless of the setting, be it a recording studio, a concert hall, backstage room, his mostly black and white have immortalized the moment at hand. He captured the wild spirit of the rock era and the photographs even defined artists like guitarist Jimi Hendrix burning his guitar at the Monterey festival, singer Johnny Cash flipping the royal finger at the San Quentin Prison concert, or the last concert the Beatles have performed at San Francisco's Candlestick Park. That is why his name was mostly synonymous with rock and roll music as he was a witness to iconic moments in the rock era that he had immortalized with his trustworthy Leica camera.

But his interest in music did not start nor did it end with rock music. Marshall had taken numerous photographs of jazz artists throughout the years. Jazz was his first love, and before he became a rock celebrity photographer, jazz musicians and the jazz scene were his primary focus. Through a chance encounter with saxophonist John Coltrane in his native San Francisco, who was asking for directions to Berkley, he managed to take a photograph of him for an exchange of an information. Later, when he moved to New York in 1962, he regularly took photographs in various jazz and folk clubs he attended. His photographs also adorn the covers of both Coltrane Quartet's Ballads and pianist McCoy Tyner's Live at Newport, to name but a few.

When Marshall passed away in 2010 at the age of 74, he had left behind an enormous archive of over 1 million negatives where most of the images were never before published or shown. Since then, several books have been published that dig deep into his archives and recapitulate some aspect of his long and illustrious career. Consisting primarily of never before published photographs, Jazz Festival chronicles the performances of renowned and iconic jazz artists at two festivals in the '60s, Newport and Monterey. The festivals' repertoire truly read, as art director Graham Marsh had written in his essay, like a vinyl collection coming to life: from Miles Davis, Duke Ellington, John Coltrane, to Ornette Coleman, Don Cherry, Thelonious Monk, Dave Brubeck, and hundreds of other iconic musicians. Chronologically assembled in accordance with the printed program for each year, it presents a wonderful and detailed collection of mostly unpublished concert photographs, portraits, audience photographs allowing a panoramic view of people that have attended these festivals at the time. Taken on various locations, mostly on stage, backstage and in front of the stage, these photographs are a result of his insistence on being granted completely unfettered access.

And just like all great photographers his photographs stir the spirit and challenge the eyes. As much as it has to be able to tell a story visually, the music photograph has to be able to tell a story musically as well. A single music photograph, apart from its strong compositional order, has to have the ability to capture the notion when a single thought is transformed into sound. A jazz photograph captures a moment that will never be repeated again which pretty much equals the nature of jazz music when musicians mine for never to be repeated moments. With each page, Marshall's photographs turn common music moments into milestones. This treasure-trove is also enhanced by reflective essays and introductions written by the renowned journalist, author, former editor of Downbeat magazine and an advocate for civil liberties Nat Hentoff, art director Graham Mash, Dave Brolan and former president Bill Clinton.

But the book's collection of photographs did not only chronicle the burgeoning jazz scene at these two festivals, but it also captured the changes that were happening within the American society at the time. Photographers are like silent witnesses or historians with a camera as their photographs indicate the many societal changes that were occurring. Marshall's photographs communicate not only the interest about the musicians and their artistry but also communicate both the social and cultural transformations that jazz had fostered in the late '50s and '60s. Jazz has always sounded and looked special. In the early '60s, both the audience and the musicians showcase the hipness of jazz culture. The photographs show that these festivals are more like a community gathering. After all, jazz is social music.

And, as Hentoff indicated in the foreword about the times when these photographs were taken, the jazz musicians and the jazz festivals had prepared the ground for the Civil rights movement to happen and flourish. In the midst of the turmoil that was happening during the '60s, while the struggle for equality was still going on, the festivals were gathering both musicians and audiences from both communities. Jazz musicians had regularly been defying segregation laws. For a long time, both black and white musicians were banned from performing together in public. As this music was reaching to the minds and ears of more and more white Americans, the resistance towards segregation had increased. Obviously, jazz has been one of the major forces that have sped up that process.

At once personal and intimate, historical and universal, this book is a real treasure trove of genuine artists. Jazz music can inspire such a fervor in its fans that this attachment can receive an almost divine dimension. Those who believe in music paradise know that the artists in this book occupy a special place in heaven.