BY GREG SIMMONS
October 9, 2011
Sign in to view read count 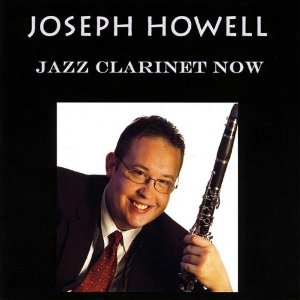 "Don't judge a book—or CD—by its cover" may be a cliché, but it's still good advice. Joseph Howell's Jazz Clarinet Now features a smiling picture of Howell, neatly attired in a suit and tie, a high-and-tight haircut, and thin-framed glasses. Prominently holding his clarinet, the cover screams old-timey, Benny Goodman Swing-era period piece. Of course, the problem with judging a CD by its cover is, sometimes you get caught with your pants down.

Jazz Clarinet Now is one of the best stick records in recent memory, despite a few warts. The clarinet can be an old-fashioned sounding instrument, but that doesn't preclude it from making a thoroughly modern proclamation. Howell's playing would be at home in almost any contemporary straight-ahead setting, and perhaps some more adventurous gigs as well. His grasp of the jazz vernacular is up-to-date and forward-thinking.

Jazz Clarinet Now is a mostly straight-ahead affair, but there are plenty of twists along the way. Howell has a warm, full sound, and can often be found in the clarinet's fatter lower register, emphasizing the instrument's woody textures. He also picks up the tenor sax and flute on a couple of tracks. His co-conspirators are first rate, with standout piano work from Alex Brown.

The album reaches an outré apex with "The Pot Melts." Opening with plodding discord, the piercing chaos gives way to a reinterpreted hip-hop beat, played acoustically. The clarinet —overdubbed to fill out the sound a little—drops an abstruse melody with some subtle electronic effects added. The piano provides a heavy sonic floor that anchors the piece with both bass weight and rhythm. It's a real attention- getter and, at a mere two minutes long, brings to mind another cliché: "Always leave them wanting more."

The record also takes a swing at free improvisation on "Without Reason," perhaps with less success than the rest of the record. If done often enough, "just making shit up" can itself become cliché, especially if it doesn't delve into any new language or if it sounds forced, as it does here. It's not bad, per se, but it's clearly not Howell's native tongue.

On the other hand, "Siwwy Babbitt" is an example of everything Howell does right. A slightly funky melody over some soft block chords opens, before Howell drifts off into expanded, imaginative improvisation. Howell has studied under the great tenor Jerry Bergonzi, and he's taken those lessons to heart. That he delivers his improvisations on an instrument that almost qualifies as "rare" in contemporary jazz just makes it that much more satisfying.

Jazz Clarinet Now is imperfect but excellent. Howell's effort to show the clarinet in a contemporary jazz setting is credible, and ultimately successful. The record could just as easily have been called Jazz Today, and it would still have been spot on.

Which Way; Mood Piece; The Pot Melts; Bergonzesque; Blues For A Sicilian Friend; Looking Back; Without Reason; Siwwy Wabbit; The Phone Call; A Line Of Mine.