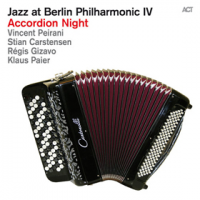 It's Paier/Valcic and Peirani/Parisien that stand out. Paier's "Tango Loco" is a dynamic opener, accordion and cello both displaying intensity, power and sensuality. Parisien takes the lead on a warm and sweet-toned rendition of Sidney Bechet's "Egyptian Fantasy": the cheery, good-time Gallic waltz-time groove of "3 Temps Pour Michel P," which Peirani wrote in tribute to Michel Portal, is the album's highlight.

The evening's finale, a performance of Astor Piazzolla's "Libertango," featured the entire ensemble. It's a fiery version of the classic tune. Each of the accordionists sound at home on the number, as do Parisien, Valcic and Baldych. Lê seems less comfortable, his rock-style guitar solo lacking the slinky, sexy, vibe that emanates from the other players. In truth, it's "Tango Loco" and "3 Temps Pour Michel P" that really capture the full, joyous, impact of the accordion.