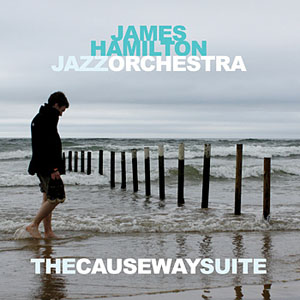 James Hamilton is an idiot and the world is a better place as a result.

The debut album by his 19-member orchestra, The Causeway Suite, is the 2010 British Composer Awards' 2010 winner for Contemporary Jazz Composition. The live performance is a bold and abruptly shifting mix of classic and modern concepts, full of innovation in group and individual passages, and a worthy acquisition even for those who (like me) don't always cotton to big band.

He's giving the thing away at( Bandcamp, making it one of the best freebies I've encountered in some time.

Hamilton, an Irishman in his late 20s, calls The Causeway Suite "a nostalgia-filled musical tour of the picturesque Antrim coastline." Tourist websites describe the rugged coast as a beautiful northern Irish area "that doesn't get as much attention as it deserves" (fitting for Hamilton). Highlights range from natural wonders such as 300-million-year-old schists and the British Isles' largest lava field to human imprints such as a Stone Age weapon factory, Megalithic monuments and giant graves.

The album's musical influences, according to Hamilton, include Duke Ellington to Kenny Wheeler. The audience at the Leeds College of Music on Dec. 3, 2009, probably was also expecting an element of traditional Antrim folk, especially since the orchestra has all the necessary instrumentation (including an accordion player) for its own Celtic group.

Hamilton doesn't make listeners wait for it, with flutes and horns adding an Irish accent to the buildup right after the opening bars of "Part 1—Arrival" (a muted percussive mix that sounds remarkably like someone walking on gravel—I rewound it to make sure it wasn't the conductor walking on some odd stage surface to the podium). The first horn solo comes about three minutes in, an aggressive two minutes of phrases contrasting varying levels of accompaniment from the rest of the section. If anyone was straining to hear the Irish elements at the opening, Hamilton wallops us with them with all the subtlety of a puff in a lift (to use U.K. patois) during a short subsequent interlude, after which the opening makes another stark shift by concluding with a finale of free play between a few of the soloists.

The lack of consistent style is the consistent theme throughout. "Part 2—The Stones" goes from a Broadway show tune opening to electric guitar-driven four-beat rock to horn ensemble swing to a freeform to collision to momentary silence. A quaint resumption builds to an overlap of four-beat and big big before a concluding post-bop sax solo that, like others, seeks to distinguish itself from the instrumental crowd through contrast rather than volume.

"Part 3—The Giant's Boots" opens quietly with an acoustic bass and percussive stabs, including what sounds like blatant tonal atrocities being inflicted on that accordion, before a featured sax solo in the Marienthal/Kashiwa fusion vein. "Part 4—Thoughts of a Glen" may be the most introspective look into Antrim's cultural roots, with a meditative piano joined by a wistful and sparse accordion. They're joined by a mostly lyrical horn section that occasionally makes abrupt atonal detours. The piece transitions seamlessly into the more group-oriented "Part 5—The Organ Pipes" to conclude the suite.

The finale after an introduction to the band, "Northern Land" is another mix of shifting styles beginning with a dance of several instruments either vamping or playing simple phrases that contradict while somehow making a cohesive whole in a chaos theory sort of way. That shifts to something that could pass for smooth jazz big band, leading to an ascent reminding me of mid -'70s pop (think the music from Rocky) and then a single muted trumpet fading the performance out. All in all, it's a vaguely less satisfying sendoff than the suite that was received with obvious enthusiasm by the audience, but not surprising given how frequently that occurs.

There are passages in The Causeway Suite that would be clichéd or tedious over the stretch of an album, or even a single song, but in this context are intriguing for how the auditory square pegs fit into round holes. That's not to say those moments couldn't have been filled with material raising this album even higher, but it's still a rather impressive project for a debut, freebie, or youngster—to say nothing of all three.

Bonus: Hamilton's Bandcamp page also offers The Venue, a free four-song EP of live "experiments" that led to his writing The Causeway Suite.