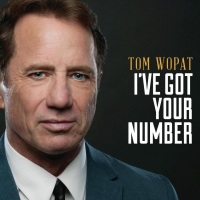 In recent years, there's been a cottage industry of celebrities from rock, pop, country and television who wander into the American Songbook in the sunset of their careers and try to put out "jazz" albums. This CD is a welcome exception. While Tom Wopat may be best-loved for playing "Luke Duke" on the Dukes of Hazzard TV show (1979 to 1985), he has serious country music bona fides as well as two Tony nominations for his Broadway efforts. For those who are unfamiliar with his musical gifts, I've Got Your Number will come as a delightful revelation.

Given the stereotypical pictures on the CD—the stock come-hither look, the requisite decorative blond, and Freud's symbolic cigar—one might well expect a throwback to the lounge-y, finger-popping experience of the 50s. Certainly nine horns and twelve strings could easily send things in that direction. But the exquisite arrangements, excellent soloists, and rich variety of material, tempo and mood dispel that notion from the jump. To start things off, pianist/arranger John Oddo gives the title track a laid-back Brazilian beat, weaving just the right amount of ornamentation around Wopat's silky and swinging voice.

It's also rare for CD reviews to discuss arrangers, but these three are particularly deserving. Oddo masterfully reinvigorates such songbook warhorses as "The Good Life," "Devil May Care," "Call Me," "Born to be Blue" and "I Won't Dance" as well as James Taylor's manifesto "Secret O'Life," which was famously covered by Shirley Horn; here, it lifts into a brighter tempo with an intimate Wopat interpretation and an eloquent solo by producer/bassist David Finck. For his part, pianist/arranger Tedd Firth adds fresh colors to such ballads as "The Folks Who Live on the Hill" and the biggest surprise on the album: a beautiful version of Judy Collins's anthemic "Since You've Asked," which first appeared nearly fifty years ago on her legendary "Wildflowers" album and is usually sung by a woman to a man. The collection also includes Bruce Springsteen and Paul Simon tunes arranged by the fine pianist Henry Hey; while these songs are more notable for their lyrics than their melodies (Simon's "The Afterlife" being hilarious), they serve as good showcases for Wopat's intelligent and understated delivery.

When you fold in the superb production values, like the clarity, warmth, and pacing of I've Got Your Number, the result is a consistently elegant and joyful journey that reveals more subtle pleasures with every spin.

I’ve Got Your Number; The Good Life; Meeting Across the River; Summer Dress; Devil May Care; The Folks Who Live on the Hill; Call Me; The Afterlife; Since You’ve Asked; Born to be Blue; I Still Feel That Way; Secret O’Life; I Won’t Dance; Here We Are Again.