By HRAYR ATTARIAN
August 31, 2016
Sign in to view read count 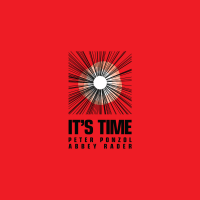 Reedman Peter Ponzol not only designs and makes unique mouthpieces for various saxophones he is also an imaginative improviser with a singular style. He and intrepid drummer Abbey Rader have a long history of collaboration spanning over four decades. On their 2016 It's Time they perform 11 intimate, original duets that are full of sublime mysticism and showcase individual virtuosity and seamless camaraderie.

Rader masterfully blends sparse chimes and reverberating cymbals with silent pauses as he sets a Zen like mood for the ethereal "Hear The Light." Ponzol lets loose meandering phrases that undulate with contemplative lyricism over Rader's thundering kit. The pair embellishes the introspective theme with unbridled spontaneity infusing it with passion and hints of melancholy. Ponzol and Rader flawlessly fuse their distinctive instrumental "voices" to usher in the tune's moving, climactic conclusion.

A strong spirituality imbues the album. This is as evident on the solemn "Many Mansions," the serene "Peace" as it is on the vibrant and organic "Hunger." The first is simultaneously ethereal and somber. Tolling bells and atmospheric rattles of small instruments mix with mournful saxophone to create a transcendent hymn. On the second, Ponzel's tenor chants rise over the Rader's rumble in a pastoral prayer. The result is powerful yet tranquil and moving.

The third, that opens the disc, comprises of two energetic overlapping monologues. Ponzel plays a raw and introspective tenor over Rader's tense drums. Quickly the music transforms into a riotous given and take with fiery honks and roaring polyrhythms. Despite the fury of the refrains the duo maintains the track's lilting soulful core.

Even though they have worked together sporadically Ponzol and Rader have forged a superb artistic partnership. This, near perfect, release is testament to that. It also demonstrates their unrelenting explorative sense and their bold ingenuity. Both have achieved splendid musicianship, matured with time and experience without losing any of it youthful vigor.