Home » Jazz Articles » Norma Winstone with the NDR Bigband: It's Later Than You Think

Norma Winstone with the NDR Bigband: It's Later Than You Think 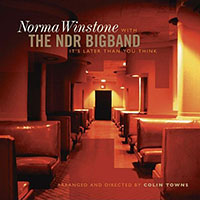 The world of the hardened jazz fan has had little room for the "jazz singer" in recent times. Resentment at the popular and commercial success of certain well-known names has resulted in many listeners turning their backs completely on vocal jazz—which is a pity, as they will miss out on enthralling musicians like Norma Winstone.

Winstone has been a major figure on the British scene since the 1960s. She cut her teeth with the ensembles of Michael Garrick and Mike Westbrook, before going on to long associations with Kenny Wheeler and John Taylor. Recent years have seen her collaborate with veterans like Jimmy Rowles, Fred Hersch, Ralph Towner and Steve Swallow, while also performing with younger musicians from Britain, Germany and Italy. As always, her repertoire has been broad, drawing from standards, originals and adaptations of contemporary songs.

It's Later Than You Think sees Winstone's voice set against the full sound of the NDR Bigband in a programme of largely contemporary song. The arrangements are by Colin Towns, one of Britain's most inventive orchestrators, with whom she recorded the superb Dreaming Man With Blue Suede Shoes (Provocateur, 1999). "Smoke Gets in Your Eyes" opens and closes the album in a dreamy blur of off-centre harmonies, the voice never allowed to settle into supper club smooch.

"Big Yellow Taxi" is a perilous undertaking—guitar-based songs often become earthbound in a big band treatment, losing their natural flow—but Towns is able to sustain a lightness of accompaniment that sets off Winstone's original take on the melody. Elvis Costello's "15 Petals" has a quasi-African feel, whilst Leonard Cohen's "Sisters of Mercy" reaches a nightmarish centre-point with discords reminiscent of Kurt Weill. With "Watching John" a cool piano and vocal opening slowly expands, the orchestra taking oriental steps towards enriching the overall colour. This is a sound world that admirers of Maria Schneider will love.

"Liberty City" uses Jaco Pastorius' boppish lines as a vehicle for inspired wordless vocalising, much more than scatting! The temperature is relaxed again with a slow-burning version of Randy Newman's "Feels Like Home." "Take The Floor" is underpinned by rhythms that seem to draw from Asia, Spain and Latin America, the orchestra again providing an ever-shifting cushion over which the vocals can soar as an independent instrument. The album ends with a crepuscular "Harlem Nocturne, melting back into the cloudy refrain of the opening song.

Given that a recent German disc (Chamber Music, Universal 2002) passed by almost unnoticed, and Winstone's recent projects centred on the music of Shorter and Coltrane remain as yet unrecorded, it is a relief to see this major disc issued (though, at the time of writing, licensed to a German company from Towns' Provocateur label). Norma Winstone is a British national treasure, adored by those who know her but still largely unsung in the world at large. With any luck this disc will find its way to the larger jazz audience, reminding them of just how rewarding vocal jazz can be when handled by a musician of Winstone's stature.

Visit Norma Winstone on the web.