By Bruce Wallace
February 18, 2003
Sign in to view read count 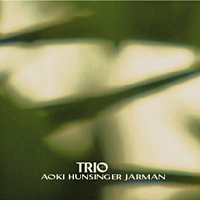 Listening to Melungeon Records’ Trio, one is reminded of the oft-repeated wisdom about Cecil Taylor’s approach to piano; that he played the instrument as if it was “eighty-eight tuned drums.” The musicians on the album have built careers out of taking their instruments beyond the roles generally reserved for them within jazz contexts.

It wouldn’t be stretching analogies too far to say that Tatsu Aoki plays the bass as if it were four tuned Taiko drums. Aside from being a frantically busy instrumentalist, he is also an assistant professor of film at the Art Institute of Chicago, the founder of the Asian American Jazz festival, which debuted in October of 1996, and is president of Asian Improv Records, which makes its home in Chicago and San Francisco. His trademark droning bass phrases create repetitive rhythmic pulses that rarely come close to a walking bass-line.

Reed-player Robbie Lynn Hunsinger is equally versed in classical (she has several recordings with the Chicago Symphony Orchestra), jazz (work with Evan Parker and Cassandra Wilson) and world music idioms. And Joseph Jarman, a founding member of the Art Ensemble and the AACM, has formulated an aesthetic that synthesizes the entire trajectory of, as AACM’s mantra goes, “Great Black Music, Ancient to the Future.”

The album’s opener, “Consequences,” begins with Hunsinger suggesting a simple figure with a vaguely eastern feel. Jarman picks up and embellishes the figure in a fine duet between the two woodwinds before Aoki enters, first mirroring the two wind players, and then gently turning a corner into the song’s second section, built around a repeated, chorded bass pattern. Jarman and Hunsinger fade in and out over top with percussive, a-melodic voicings while Aoki rumbles along. Following Hunsinger’s lead, the trio morphs briefly back to the original harmonic space before the song fades out.

Throughout the playing is understated and contained. “Procession” opens with Jarman and Aoki marching in lock-step through a simple, straight-eights bass pattern with Hunsinger laying angular melodies overtop, first on the Sona, a Chinese oboe, and then on the Shenai, an Indian oboe. The mournful “Requiem” closes the album, striking a meditative, ambient pose with Aoki’s rasping bass taking a turn at melodic directing. This album is a great artifact among a number of first-rate projects that have been produced as Chicago’s many rich musical heritages continue to intermingle and cross-pollinate and stretch musical possibility a little farther every time.