Getz acquired a far higher public profile than Cooper ever did, and Cooper didn't record under his own name anywhere near as much as Getz did....

Stan Getz will always be admired for the purity of his tenor saxophone tone, spawned by Lester Young, personalized and polished to dazzling point by Getz. Indeed, for the latter part of his career he used it to disguise the fact that he often coasted. That stage was still some way in the future when he recorded Award Winner for Verve in Hollywood in August of 1957. He'd already attracted attention in the annual magazine polls, hence the album's title. By this time he'd already been working professionally for over a decade. His playing had by then reached a high level of technical accomplishment, and no other player in the history of the music ever had a better grasp of the sheer mechanics of saxophone playing. But the imperviousness of his work often gave it the air of technical accomplishment acheived at the expense of feeling. To be sure, the listener is never in any doubt over the player's facility, and Getz is never shy about the extent of it. Admirable though this may be, doubts can be entertained over the level of feeling he invested in his playing. 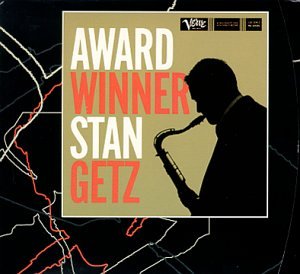 On Award Winner the drive that was an integral part of his early work is still there and the puriity is happily diluted by an earthy impression of Getz wanting to engage with his band, as opposed to requiring them merely to provide accompaniment for a master at work. As time passed, with one or two honourable exceptions on record, this vitality of spirit waned.

Both Getz and Bob Cooper worked in Stan Kenton's band, though not simultaneously. Cooper joined the band at the age of nineteen just a few years before Getz put in his stint with Woody Herman in the later 1940s. He was at first influenced by the undervalued Lucky Thompson, though by the time he recorded For All We Know, also in Hollywood some thirty-three years after the Getz date, his playing had not a little in common with Al Cohn's. It also possessed an air of human frailty outside of Getz's command. Whilst both players had technique, Cooper does not bring his to bear simply as a means for showing off. Whilst technique has always been an asset, when it's employed as frequently as it was by Getz as an end in itself, as opposed to a means to the end of giving something to the listener, it can be a burden. 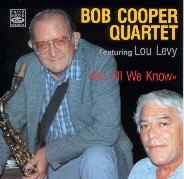 Getz attained a far higher public profile than Cooper ever did, and Cooper didn't record under his own name anywhere near as often as Getz did. Described by Art Pepper as 'one of the warmest, most polite, pleasantest people'(1) perhaps such qualities worked against him. Certainly the recordings he co-led playing the oboe with Bud Shank on flute must rank amongst the politest jazz ever recorded. As time passed, however, and as 'For All We Know' shows, politeness was musically usurped by experience. His tone there is full and imbued with the depths of life's travails. Throughout the album there is a deep sense of pleasure in the act of saxophone playing which, whilst it's not so deeply ingrained as it is in Zoot Sims's work, is still the product of a man at ease in life and relatively untroubled. Having said that, he brings to 'Cherub', his own composition, a sense of melancholy that does a whole lot more than skim the surface. Where Getz's undeniable lyricism is always steeped in the fact that he wants his listeners to know how good he is, Cooper makes no attempt to move through virtuosity alone. He is more adept at making every note count, just as he does on For All We Know itself, where he plays like a man addressing the love of his life, who happened to be singer June Christy, to whom he was married for forty-three years, and who'd died just two months prior to the recording of this album. Through her absence Cooper's music is imbued with her spirit, and it's apt that the album is dedicated to her memory.

The pianist Lou Levy is present on both dates, and his playing has evolved in the decades between the two. There are abundant signs of this, and it's interesting to note how he approaches the task of accompanying two dissimilar saxophonists. In Getz's company he displays a lightness of touch and luke warm drive that disguises the Bud Powell influence that sometimes came over in his work; it's as if he's holding something back out of a sense of deference for Getz's undoubted invention, and nowhere is this more evident than on the master take of 'Woody'n'You', where his apposite accompaniment sits rather awkwardly alongside his solo, where his right-hand interjections allude to the work of Horace Silver. By contrast his solo on 'Three Little Words' positively dances, alive to every nuance of the medium-up tempo at which the song is taken.

By the time of Cooper's date, Levy's playing has unsurprisingly taken on a deep but joyously autumnal hue that is again the product of maturity. His considerable skills as an accompanist are on full display, and nowhere is this more evident than on 'But Beautiful', where Cooper's gift for understatement is lent admirable support.

So whilst Getz was by far the more visible of the two saxophonists, it might have been the case that that visibility was as much to do with marketing as with any inherent qualities in his playing. Bob Cooper, for all the comparative modesty of his public profile, afforded us a glimpse of a depth of humanity through the medium of saxophone playing that Getz, for all his attributes, succeeded in tapping only intermittently. To conclude, perhaps an intimation of mortality, or at least a vicarious acquaintance with it, is one of the more potent aids in the evolution of musicianship.