In the case of both Davison and Freeman the old saying about not seeing their like again is entirely apposite.

As an art form jazz has thrived in a number of different environments, and the school of the music that came to fruition under the ostensible stewardship of Eddie Condon, a man whose abilities as a raconteur were at least on a par with his abilities as a guitarist, amounted to a freewheeling brand of the music which thrived best before a receptive live audience. There was however a whole lot more to it than anything that might suggest, and if the term 'the Condon school' can be realistically applied it might well disguise the breadth of stylists who found a happy home within it; the likes of Bud Freeman and Pee Wee Russell showed little stylistic overlap outside of their penchant for the Condon school.

The two dates discussed here, under the leadership of Wild Bill Davison and Freeman and recorded in 1955 and 1966, testify not only to the longevity of the form but also to the breadth of its spread and influence -on his date Freeman is in the company of the Alex Welsh band, which in its time was the nearest thing Great Britain had to a Condon mob of its own. The band proves throughout to have been one of the most adept working within the Condon idiom regardless of place of origin. For his part Davison is but the nominal leader of a band billed as Eddie Condon's All Stars, and for once the billing isn't misleading.

Freeman continues to occupy an unfairly anomalous position in jazz history, and by the time of this recording his playing has about it the air of a brawnier Lester Young. This is perhaps best exemplified by his work on the venerable Royal Garden Blues where he bizarrely comes on like a mainstream Evan Parker in his exchange of fours with drummer Lennie Hastings. Young is of course commonly regarded as the first tenor saxophonist in jazz to come up with an alternative to Coleman Hawkins, whose work was understandably pervasive in the early decades of the music. For his part Freeman's work has always upset this simplistic view.

Davison was not a player lacking in personal idiosyncrasies, and he's to be found here in the kind of exuberant form that became a hallmark of his playing. In his case age brought with it increasing depth to his musicianship -no great surprise in itself- and here he provides the kind of robust cornet lead that was the mark of any Armstrong-influenced player worthy of that exalted status. At the same time he shows little of the reflective air that was perhaps the product of the debilitating effects of aging, and to all intents and purposes the music caught here is merely the product of the band on a particularly good night. That said, the joie de vivre of both ensembles is of a potency that would make a fortune for anyone who ever worked out the process of bottling it. The same could be said for Pee Wee Russell's clarinet playing, for which the term "idiosyncratic" might have been invented; his playing here is an example of his usual unorthodox way. 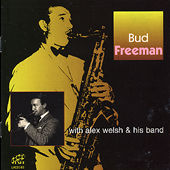 By comparison, Freeman in the company of the Welsh band errs slightly more on the reflective side, although there are of course times when the crowd is suitably roused, not least when Freeman employs a curiously antiquated vibrato. The trombone of Roy Williams, however, takes the music closer to Ellington by comparison with the purity -for want of a better way of putting it- of the Condon All Stars.

In the case of both Davison and Freeman the old saying about not seeing their like again is entirely apposite, and the fact that both of the dates discussed here capture simply another night's work for working bands offers an insight into a world that to all intents and purposes is receding slowly from view. This does not however detract from the Condon model, a fact that's underlined by its longevity.